This post was written by Guest contributor Seema Shafei (@seemashafei)

As a Libyan living abroad, I have been struck by the growing celebration of Libyan women’s culinary skills by other Libyan women on social media. During rough times in Libya because of political instability, Facebook became an outlet for women all across the country to not only connect with their loved ones, but to show off to them.

Although some might critique the fact that women often remain restricted in their domestic roles, there is a certain strength in these women posting about their daily lives. No longer will their work of toiling in the kitchen go un-noticed. While in my experience Libyan women can be intensely surveilled and criticized for their cooking by their family and community members, Facebook has become a tool for these women to have agency in how their cooking is seen. Rather than having only close family members or dinner guests see the meal as just a part of the mundane, the meals are seen as works of art crafted through the lens of photography and creative arrangement.

This is especially applicable to those Libyan women who have travelled overseas, just like my own mother. The posting of food can work as an affirming statement for these women who are often situated at a crossroads. They are far away from their home country but they do not feel at home in the host community in which they live. Facebook is seen as a source of solace for easing the burden of miles of distance and the isolation that can come from the realities of immigrant life.

Through the pictures of rich dishes with delicately placed garnishes, there is a network of women letting the Internet know that they are surviving abroad. As food is the source that links all human beings together, being the concrete nutritive necessity for survival, the photos these women post of their food are a way of confirming the family’s vitality within a country that is not necessarily their own.

There had been times where I had looked down upon these pictures, seeing them as empty and useless. This is a common sentiment expressed amongst the Libyan community. The men tend to circulate political news and post important news of which areas of the city are no longer safe. Meanwhile, the women would post the cake they made for the afternoon, or the layered non-alcoholic cocktail drinks they had concocted. And that can be looked down upon.

However, this dismissal of women’s work is wrong. With Facebook, women all across the country use the platform to be noticed. The women who stay home, the mothers, the disabled, the elderly and all of those whose voices are so often silenced or kept as background noise are now able to ensure their visibility on everyone’s newsfeeds. If meals take hours to make and become a communal gathering point for the family, why should this labor go unacknowledged?

I have become accustomed to going to my uncle’s house and helping set the table, sitting down to eat, and then waiting for my aunt to take her photos. She’ll reposition plates, add garnishes of chopped parsley, and maneuver around the table trying to get the pictures that reflect the quality of her food, demanding people see the value of the time she spent making the dishes.

After eating and retreating to my phone, I see her photos posted with comments of friends wishing that they were there to taste the food. They gush about how delicious everything looks. “I know,” she replies.

November 4, 2015 Has Quantico got positive female Muslim roles covered?
Browse Our Archives
get the latest from
Muslim
Sign up for our newsletter
POPULAR AT PATHEOS Muslim
1 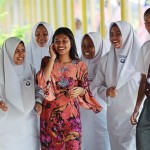 Muslim
Not Between Her and Allah: Hijab-shaming in Malaysia
Muslimah Media Watch