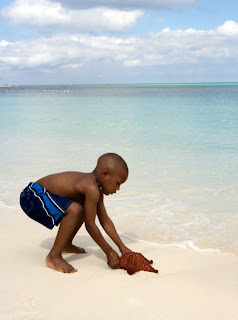 While researching for last Sunday’s sermon one of the threads I followed although never used was that inspirational story which I’ve heard in a variety of ways, featuring a small girl (my favorite), a boy (just about as good), an old man (okay) and a rabbi (also okay). (these okays, etc are not meant to be value judgements, only represent tastebuds…) I had in the back of my mind that it was something by Loren Eiseley. And as I began to search the web I read versions that were attributed to him or said to be based upon something he wrote in a book, The Unexpected Universe. And there are a lot of versions, even a children’s book.

Well, finally I found Eiseley’s version, and read it, but it wasn’t actually the story I had in mind.

In a pool of sand and silt a starfish had thrust its arms up stiffly and was holding its body away from the stifling mud. “It’s still alive,” I ventured. “Yes,” he said, and with a quick yet gentle movement he picked up the star and spun it over my head and far out into the sea. It sunk in a burst of spume, and the waters roared once more. …”There are not many who come this far,” I said, groping in a sudden embarrassment for words. “Do you collect?” “Only like this,” he said softly, gesturing amidst the wreckage of the shore. “And only for the living.” He stooped again, oblivious of my curiosity, and skipped another star neatly across the water. “The stars,” he said, “throw well. One can help them.” …”I do not collect,” I said uncomfortably, the wind beating at my garments. “Neither the living nor the dead. I gave it up a long time ago. Death is the only successful collector.”

A little further research turned up the interesting factoid that the story as I know it and as it is generally copied around the web was inspired by Eisely with full credit, but actually is the work of a motivational speaker named Joel Barker.

Here’s the original version, near as I can tell, of Barker’s story.

There’s a story I would like to share with you. It was inspired by the writing of Loren Eiseley. Eiseley was a very special person because he combined the best of two cultures. He was a scientist and a poet. And from those two perspectives he wrote insightfully and beautifully about the world and our role in it.

Once upon a time, there was a wise man, much like Eiseley himself, who used to go to the ocean to do his writing. He had a habit of walking on the beach before he began his work.

One day he was walking along the shore. As he looked down the beach, he saw a human figure moving like a dancer. He smiled to himself to think of someone who would dance to the day. So he began to walk faster to catch up. As he got closer, he saw that it was a young man and the young man wasn’t dancing, but instead he was reaching down to the shore, picking up something and very gently throwing it into the ocean.

As he got closer, he called out, “Good morning! What are you doing?”

The young man paused, looked up and replied “Throwing starfish into the ocean.”

“I guess I should have asked, Why are you throwing starfish into the ocean?”

But young man, don’t you realize that there are miles and miles of beach and starfish all along it. You can’t possibly make a difference!”

The young man listened politely. Then bent down, picked up another starfish and threw it into the sea, past the breaking waves.

“It made a difference for that one!”

His response surprised the man. He was upset. He didn’t know how to reply. So instead, he turned away and walked back to the cottage to begin his writings. All day long as he wrote, the image of the young man haunted him. He tried to ignore it, but the vision persisted. Finally, late in the afternoon he realized that he the scientist, he the poet, had missed out on the essential nature of the young man’s actions.

Because he realized that what the young man was doing was choosing not to be an observer in the universe and make a difference. He was embarrased. That night he went to bed troubled. When the morning came he awoke knowing that he had to do something. So he got up, put on his clothes, went to the beach and found the young man. And with him he spent the rest of the morning throwing starfish into the ocean.

You see, what that young man’s actions represent is something that is special in each and everyone of us. We have all been gifted with the ability to make a difference. And if we can, like that young man, become aware of that gift, we gain through the strength of our vision the power to shape the future. And that is your challenge. And that is my challenge. We must each find our starfish. And if we throw our stars wisely and well, I have no question that the 21st century is going to be a wonderful place.

I’m not sure I don’t actually like Eiseley’s version better. But the version I’ve heard so many times, while maybe told a bit too sentimentally and too often with the moral explained, it’s still a good story with an important point.