Pi’s Question and Ours 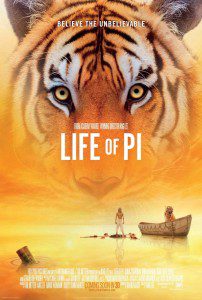 Spoiler alert! If you’ve not seen the film or read the book, there is a chance you don’t want to read this…

We really liked the movie.

It is a visual masterpiece. We saw the 3D version and I hope you did, too.

And there was a fascinating question burned into the heart of the story.

If you are presented with an event too horrific to look at straight on, is it okay to have another story that is less directly painful, more allegoric or metaphoric?

In the film the officials from the Japanese ministry when they feel there are too many holes in the story of the tiger push him & he tells the second story, much sadder, much harsher. Faced with the choice the ministry officials decide to go with the tiger story.

And then there’s that line hanging in with it, “and so it goes with God.”

Now, throughout I thought the religious parts of the story not particularly interesting. A child trying on religions totally at the surface of the matter.

But then we get that question caught up with how hard it can be to look straight on, and whether looking slant isn’t the way to go? And, maybe this is true for questions of God, too?

Now, maybe that is someone’s religion. I believe the questions of the story about someone’s personal encounter perhaps sometimes requires distance. For the what was the age of the boy at the time of the incident, fifteen? Okay, maybe it is too hard. But even in the film I thought that the what forty year old Pi still picking the tiger over the cook, well, that was a lot less attractive. And not particularly useful for someone hoping to live into real life.

And, really, is religion just the fifteen year old version of human experience?

I know some would say yes. And bless ’em. There’s a lot of fifteen year old religious sentiments out there.

But, for me, I want my religion straight on. Stories and myths and metaphors all have a place in the great mix. But not as substitutes for facing things.

Rather as part of the dream reality that is also part of who we are. Not a buffer. Part of a bigger whole of which we are all a part.

And which we dream into and out of.

That dream world is just fine by me, and a central part of my religion.

It comes out of direct encounter with the mess as it is.

And that is the deal.

November 25, 2012
PENETRATING THE WHOLE MYSTERY OF LIFE; GIVING THANKS FOR EVERYTHING
Next Post

November 28, 2012 A Few Random Thoughts in the Midst of Zen's Various Sex Scandals
Recent Comments
0 | Leave a Comment
"This post did not discuss P. Gage. It had some unrelated, brief comments, ending with ..."
cschriner@uuma.org Thinking of Phineas Gage, His Personal ..."
"Wonderful. It is good to be at home!"
Roger Butts Dreaming California
"To James Ford. You asked if there was any other Unitarian organization in the Philippines. ..."
Greg Abreu Recalling the Unitarian Bishop Gregorio Aglipay
"I studied at a UMC seminary. The meeting was indeed sometimes discussed over a glass ..."
Zzyzx Was John Wesley Consecrated an Orthodox ..."
Browse Our Archives
get the latest updates from
Monkey Mind
and the Patheos
Buddhist
Channel
POPULAR AT PATHEOS Buddhist
1

Buddhist
The Buddha Holds Up a Flower: A Meditation...
Monkey Mind
TRENDING AT PATHEOS Buddhist