When Marian Anderson Rocked the Mall 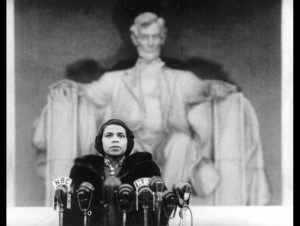 Symbols count. Don’t ever let anyone tell you they don’t. They are not the end of the deal, of course, but they can be enormously important.

Case in point. The Daughters of the American Revolution refused to let celebrated contralto Marian Anderson perform in Constitution Hall because she was African American. The uproar that followed has echoed to this day. First Lady Eleanor Roosevelt resigned her membership in the DAR, and with the aid of her husband, was able to arrange for Ms Anderson to sing on the steps of the Lincoln Memorial on this day, which was Easter Sunday, in 1939. It is estimated she performed before a live audience of seventy-five thousand, and on radio before millions. The story was repeated in newspapers and in newsreels.

One moment. A symbol for several things.

She was one of those perfect people at the perfect moment. Some years after this public shaming, a shame that so many quietly took in, the leadership of the DAR reversed its racist position, and Ms Anderson accepted their invitation in 1943 to sing at Constitution Hall as an American Red Cross war relief benefit.

And another small gesture, many years later when Ms Anderson launched her farewell concert tour, she chose to perform at Constitution Hall to begin the tour.

April 9, 2016 Tom Lehrer: Always Predict the Worst & You'll be Hailed as a Prophet
Recent Comments
0 | Leave a Comment
"I have to chuckle, just past the four Bodhisattva Vows I ran into an offering ..."
Kyllein MacKellerann " The Four Bodhisattva Vows
"In a way, it's frustrating—all that data and nobody knows a Da*n thing. Seriously, things ..."
Kyllein MacKellerann " My Quest for Unbiased News: Or, ..."
"The first river of the Bible is Pison: " The name of the first is ..."
Herrnhut Prophecies of the End: Dreams of ..."
"My primary consciousness on Zen is that unlike religion or philosophy which depend on linear ..."
Frank Redden Recalling the Archangel Raphael & Happy ..."
Browse Our Archives
get the latest updates from
Monkey Mind
and the Patheos
Buddhist
Channel
POPULAR AT PATHEOS Buddhist
1

Buddhist
A Feast for the Holy Sovereigns
Monkey Mind

Buddhist
Of Snakes, Ladders, and the Well: a Zen...
Monkey Mind
TRENDING AT PATHEOS Buddhist