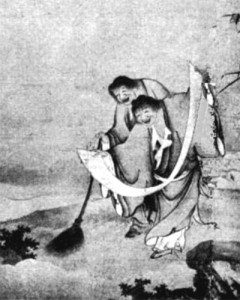 I remember a select little group with which we traveled and camped together for some days; this group had undertaken to liberate some captive League brothers and the Princess Isabella from the hands of the Moors. It was said that they were in possession of Hugo’s horn, and among them were my friends the poet Lauscher and the artists Klingsor and Paul Klee; they spoke of nothing else but Africa and the captured princess, and their Bible was the book of the deeds of Don Quixote, in whose honor they thought of making their way across Spain.

Here’s a truth: All sacred books, however wondrous they may be, were written by people. Whatever is said about the book, that it was channeled from extra-terrestrials, angels, gods, or God, in truth it was written by people. It may contain astonishing wisdom, but it will also contain mistakes, errors, and if it is long enough, internal contradictions, probably a bunch.

And so it is a major mistake to take any book as the unalloyed word of God. There is no such thing. Assuming some particular book is without error takes people into very dark corners. We see it in our American culture where a powerful collection of writings, myths, and some very serious pointers toward the depth of our human hearts is treated as a science text book telling us the world is about six thousand years old, and defend that assertion as fact with such fervor, such certainty, that it leads people with working brains inside their skulls to walk away from the whole thing.

Witnessing such fundamentalisms as such an affront to common sense can lead to people to think we’re really on our own here, that there are no worthy guides. This is a tragedy because we are in fact, surrounded by great clouds of witnesses, who are constantly singing wisdom into our hearts. People have walked on this planet, have opened their hearts and their minds and have found what is necessary to heal our wounds, and even the great wound. And books of their guidance abound. And we should be respectful, and grateful.

Beyond that, if something has proven to be a sacred text for people, even if not specifically for our people, who ever that category might be, we should approach those sacred texts with a certain respect. I’m so taken with Hesse’s wonderful little novel Journey to the East, and I love that passage where the pilgrims have taken Don Quixote for their bible. One could do far worse.

I bet one could take a little book like Jane Austin’s Pride and Prejudice and digging into it find a whole life. Or, perhaps, Graham Greene’s Power and the Glory. Or, maybe, Willa Cather’s Death Comes for the Archbishop.

Books are magical things; they can open our hearts in the most amazing directions.

And then there are those books that are by general assent the great spiritual texts. I recall when I read the Koran. At first it was simply an assignment I gave myself. I have little heart sympathy with the style of Islam. It reminds me too much of my Baptist upbringing. Although I was cautioned from the beginning about being too judgmental, as I knew very much how Sufism, Islam’s mystical school, or more properly, schools, are clearly amazing things, genuine cradles of the heart. So, I began to read it. And by the time I was half way through I was nearly half way convinced. Even in an English translation the poetry of the thing, the power of the message of a creator singing possibility into the world was comforting and challenging.

And there are parts that are so obviously self-serving for the prophet, and not useful for anyone on the path. Looking at these things, we need an open heart.And we need open eyes.

And, truthfully, one read was enough for me. I’ve had similar experiences with other spiritual texts from the world’s traditions, grateful for a single read. The Bhagavad Gita is like that. Although, I’ve been thinking of parts of the Gita’s message about embracing our dharma, our place in the world wholeheartedly quite a bit in recent years. It may be calling me to a second read sometime in the not distant future.

Other more traditionally understood spiritual books have insinuated themselves into my heart that I do visit them with greater regularity. The Tao Te Ching, for one. Chuang Tzu’s Inner Chapters, are another. Parts of the Bible, particularly the Book of Job and a couple of the psalms have been engraved on my heart. Probably the most important books for me, the ones I’ve visited and revisited over the years are the great twelfth century Zen anthologies of teaching and pointing, the Gateless Gate, the Blue Cliff Record, and the Book of Serenity. I’ve also have a love hate relationship with the Japanese Zen priest Jokin Keizan’s masterwork, his thirteenth century anthology of the awakening stories of my Zen ancestors, the Transmission of the Lamp.

Other books have touched me deeply, as well. Not to mention specific poems like Rilke’s “Ninth Duino Elegy,” Elliot’s “Four Quartets,” and Mary Oliver’s “In Blackwater Woods.”

Poetry. I’m sure each of us, as we live into our lives, have found books and poems that touch us in particularly powerful ways, that have by our living with them, by their living into us, by our living into them have become our scriptures.

The difficulty here is in our picking and choosing what to give our attention to. We need to pick. We need to choose. And the very act of doing that cuts us off from many things. We need to make choices, there are just too many things out there, and we need to find something, to make it ours, and to dig deep.

It is easy to give ourselves to something unworthy of our hearts. So, sometimes we need just to pick something big enough and diverse enough to hold our hearts for a lifetime. Perhaps it is the Koran. Maybe the Bible.

The name for a sacred text in Buddhism is Sutra. And sutra means thread. We need something we can follow all the way to the bottom. And at some point we need to focus, and to give ourselves over to a smaller handful among the many options.

Not necessarily one. But it is a small collection. To give your path focus. To help you live into it. To let it this perspective that is at once outside of us and deeply within us live us in new ways.

Into you. From you. Into me. From me.

And, with that a question: What might that be that special book for you? Or, books. Your scripture. What is your thread, your sutra, what is your sacred book?

June 30, 2016 Why a Little Biblical Literacy Might be a Good Thing
Recent Comments
0 | Leave a Comment
"At the risk of shameless self-promotion I preached a sermon on Julian of Norwich on ..."
amylynn1022 Julian of Norwich and Love. A ..."
"Yes. Lots of depth there. The Psalms are so crucially important to me. I don't ..."
Roger Butts A Unitarian Universalist Investigation of the ..."
"Think globally.Act locally.There is a lovely book available called Jesus and Buddha. It shows passages ..."
james warren The Art of Peace in a ..."
"We should not idealize or condemn Muir or anyone else. Muir was a man of ..."
Silverwolf13 A Feast for John Muir, Nature ..."
Browse Our Archives
Related posts from Monkey Mind