Waking Up With the World: A Brief Zen Reflection on the Four Noble Truths

Waking Up With the World: A Brief Zen Reflection on the Four Noble Truths January 27, 2017 James Ford

I gather there is some confusion about how what we call the Four Noble Truths became the central exposition of Buddhist teachings. They are found in two versions in the Dhammacakkappavattana Sutta, the “Sutra or Discourse of the Great Turning of the Wheel.” There are both Pali and Sanskrit versions, and, yes, neither was the language the Buddha actually spoke, but that the two versions largely agree is meaningful. And while many critics can and do point to textual inconsistencies as evidence the text was woven out of earlier materials, the fact is today all schools of Buddhism agree that the Four truths are the foundational observations of Buddhism.

And so anyone interested in Zen really should familiarize themselves with the assertions found in the the truths, whether as “truths,” or “observations,” “really good ideas,” or even “working hypotheses.” As it turns out these all work. Me, I’m going with truths.

1) Dukkha: Human suffering, anguish, angst. The sorrow that haunts human existence. It is not having what we want, and not wanting what we have. The sense of dis-ease that shadows human life. And more broadly the tension of all existence.

2) Samudaya: We are composed of parts in constant motion. While even the “parts” are in fact insubstantial, our human minds perceive this motion as if it were solid. When we try to hold tightly onto that which is constantly changing we experience dukkha.

3) Nirodha: The Good News. We need not suffer this way.

The Oxford Dictionary of Buddhism’s article on the Four Noble Truths contains what are almost certainly the Buddha’s comments which are repeated in various suttas (sacred texts in the Pali, Sutra in Sanskrit).

II. This, O Monks, is the Truth of the Arising of Suffering. It is this thirst or craving which gives rise to rebirth, which is bound up with passionate delight and which seeks fresh pleasure now here and now there in the form of thirst for sensual pleasure, thirst for existence, and thirst for non-existence.

For me the difficulty which goes right to the heart of the Buddha’s presentation and which is found in most short bullet-point summations of the Four Truths is how this can easily be understood as asserting life is suffering, suffering comes about from clinging, and the solution is to not cling. I’ve met Buddhists who think this is in fact the point of the Four Truths, including an occasional monastic, including the odd Zen teacher.

The slightest unpacking however, reveals something different.

Another way of seeing into our lives, our hurt, and our healing is through the “three marks of existence.” The first of these is anitya, a noticing that all things are impermanent, existing for a moment and then passing away. The second is anatman, the noticing that nothing has a special essence, all things are composed of parts that are themselves insubstantial, or more accurately have no abiding substance. Things exist within their moments in way similar to the contemporary wave/particle theory, where from one angle quantum entities are particles and from another waves. However, this is a way of perceiving at the psychological/spiritual level of human consciousness, where our grasping tightly after things that have no enduring substance, is dukkha, that sense of discomfort, of sadness, of hurt that seems to mark so much of human existence.

So, some look at this world of flux and constant motion and see nothing but sadness. We and everything we love will pass away. But, in fact that view is missing something quite lovely, beautiful, and, most important, real.

Here, yes, we find a world in motion. Everything and everyone are/is birthed through a confluence of events, and exist only for a moment. And, yes, nothing has substance in the sense of standing outside the flow of causality. What we perceive as a person or a thing is a snapshot of a moment. But. Everything is in motion.

Dukkha arises as a side effect of our wonderful human ability to notice and distinguish. The side effect is to reify, to make what we’ve perceived and distinguished something “permanent.” When, of course, nothing and no one is ever permanent. Hence what follows our grasping and holding too tightly that which of its nature is in motion is hurt. Can’t be done, and therefore that hurt, and a pervasive anxiousness that spoils our lives.

And. And. The good news is not a list of how to not care, but rather a middle way between thinking only motion exists or that things and people have eternal substance, that invites us into a larger and healing view. In fact this is more than a view, it is a new way of living.

Now we see into a beautiful dance of creation, where we rise and fall together, where our love matters because it is our giving our attention to the precious and passing. To use the language of the West we become the eyes of God, our seeing the divine seeing, our holding without grasping becomes a divine holding, because we are nothing less than the moment being known. Actually it becomes a sort of unknowing, because our sense of self and other are loosened, and we experience each other’s joy and sorrow as our joy and sorrow.

And with that shift life takes on an aspect more important than words like “meaning” or “meaninglessness” can touch.

And so the Buddha offered this teaching, and the Zen and other ancestors manifested out of that teaching ways for us to find this place. The eight-fold path. Now, I can never hold the eight steps in my mind, but I can understand when they’re divided into three aspects of awakening, of our original blessing, in the manifestation I find most useful, as the Zen way:

1) wisdom, that is our nondual insight. Here we see that world which includes each of us as we rise and fall but in the same instance know it is boundless.

And 3) meditation, those practices of presence that allow us to see our sense of separateness is useful but not ultimately true. Here the wisdom of sitting down, shutting up, an paying attention.

A word to those who aspire to wisdom. Start here with no more than a sense of recognition, the possibility these might be pointing true, engage, try them on, fold them into your life, and here’s a promise: worlds of healing can open up…

January 28, 2017 Zen & the Bodhisattva Way: A Meditation on the Three Pure Precepts
Recent Comments
0 | Leave a Comment
"There is a novel based on the philosophy of the Ten Ox Herding Pictures called, ..."
Jay A PILGRIM’S PROGRESS:  Zen, Maps of ..."
"That's a nice cartoon. It always fun to go back in time and see how ..."
David Brevik Fiddlesticks: Recalling the First Colored Sound ..."
"This is a wonderful and incredibly focused article. I am grateful to have read it ..."
Koshin Moonfist Zen Funerals, Rinzai Style: Reflections on ..."
"Mouse eats cat food, cat bowl is broken, then what? - Seung Sahn"
Robert Flannery AN INTRODUCTION TO THE ZEN KOAN
Browse Our Archives
get the latest from
Monkey Mind
Sign up for our newsletter
Related posts from Monkey Mind 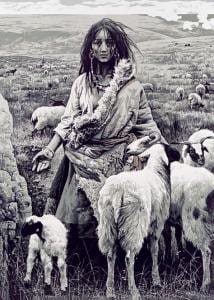 Buddhist
WALKING THROUGH THE VALLEY OF THE SHADOW Reflecting...
Monkey Mind