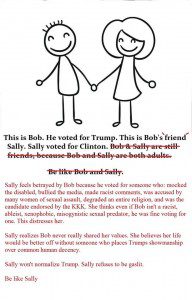 I understand some scholars suggest that it was yesterday in the year 49 before our common era that Julius Caesar crossed the Rubicon.

I have no doubt with our recent election we have crossed another Rubicon.

At the current moment there is a great deal of conversation going on about how to respond to what is happening. As with other spiritual traditions within our Zen communities we are torn, largely between those who feel compelled to speak out and those who want to make sure that everyone knows they are welcome at the Zen centers, whoever they voted for, whatever their politics.

I’ve particularly been following some blog posts and comments regarding them on social media. Among them there are three I’ve paid closest attention to. I find Jiryu Mark Rutschman-Byler made one of the more important statements about all this. Brad Warner takes another view, expressing that need to be open to all. To which Hondo Dave Rutschman offers an indirect rejoinder, reminding all of us what is actually going on. These three are all Zen priests and important voices in our emerging Western Zen community, people I respect. And one is a dear friend.

Me, I see no conflict between these two goals of asserting there is a place for everyone, while not pretending these are normal times. The problem is that it isn’t going to be comfortable. Not by a long shot. And, anyone who thinks otherwise is not living in the real world.

Here is a truth. These are dangerous times. Yes all times are dangerous. But, the invitation to normalize the current situation is past dangerous. Taking no side is in fact not an option – its just passively accepting those in charge. And, that means Mr Trump and the government he is putting together following a campaign marked by a litany of hatred of perceived others.

The way I see it is that I’ve known a lot of people over the years who have very strong opinions about how they would have acted should they have lived in Germany in the 1930s. Well, we’re at a moment where they will get to find out how accurate they were.

January 10, 2017
Death Comes for the Archbishop of Canterbury
Next Post

January 12, 2017 When the Need is Great, the Swami Appears: Recalling Swami Vivekananda
Recent Comments
0 | Leave a Comment
"This reminds me of the story about a priest holding a candle doing a one ..."
Catherine A Meditation on What My Grandmother ..."
"Fun talk. Here's my translation of the case:Raised: Guishan asked Yangshan, “Suddenly there is a ..."
Gregory Wonderwheel Book of Equanimity Case 37
"There is a novel based on the philosophy of the Ten Ox Herding Pictures called, ..."
Jay A PILGRIM’S PROGRESS:  Zen, Maps of ..."
"That's a nice cartoon. It always fun to go back in time and see how ..."
David Brevik Fiddlesticks: Recalling the First Colored Sound ..."
Browse Our Archives
get the latest from
Monkey Mind
Sign up for our newsletter
POPULAR AT PATHEOS Buddhist
1