Time to Celebrate! Proclus, Last of the Great Neoplatonic Philosophers is Born 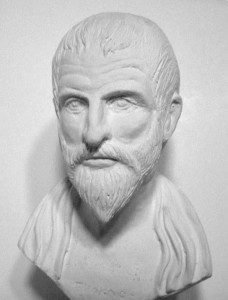 Thanks to an astrological chart we can know when the philosopher Proclus was born. It happens to be today in 412 of our common era, in Byzantium. While Christianity had taken over the business of state, here and there philosophy still could be pursued, and Proclus proved to be the last, and some might even hazard, the greatest of the Neoplatonics.

The New World Encyclopedia summarizes for us how “Proclus’ greatest concern was the elevation of the human soul to unity with its divine origins. Believing that reason could dominate the physical passions but was incapable of grasping higher levels of spiritual knowledge, he promoted theurgy, the use of material objects and mathematical symbols in religious rites intended to awaken the soul to its own divinity.”

Favored with visions, particularly by the goddess Athena, and with good teachers, he further systematized and deepened Neoplatonism. For those who may have missed the fact, Neoplatonic influences in Christianity are extensive. First principally through Augustine of Hippo who was influenced by Plotinus and Porphyry, and then, equally importantly through the Dionysius the Pseudo-Areopagite who was heavily marked by Damascus and, possibly most of all by Proclus. His influence actually extended to include Islam and Judaism. It is near impossible to overstate his influence on Western mysticism.

For me the importance of the Neoplatonists was largely in that they assured that developing Christian mysticism would have a strong monistic element, something I believe critical for seeing into the world as it is. That important.

So, thank you, Proclus!

And, a happy, one thousand, six hundred, and fifth birthday!

February 9, 2017 Bless you Sister, May all your sons be bishops: Thinking of Brendan Behan
Recent Comments
0 | Leave a Comment
"There is a novel based on the philosophy of the Ten Ox Herding Pictures called, ..."
Jay A PILGRIM’S PROGRESS:  Zen, Maps of ..."
"That's a nice cartoon. It always fun to go back in time and see how ..."
David Brevik Fiddlesticks: Recalling the First Colored Sound ..."
"This is a wonderful and incredibly focused article. I am grateful to have read it ..."
Koshin Moonfist Zen Funerals, Rinzai Style: Reflections on ..."
"Mouse eats cat food, cat bowl is broken, then what? - Seung Sahn"
Robert Flannery AN INTRODUCTION TO THE ZEN KOAN
Browse Our Archives
get the latest from
Monkey Mind
Sign up for our newsletter
Related posts from Monkey Mind