In the Neighborhood: A Meditation on the Golden Rule, Cheaters, and Prophets

In the Neighborhood: A Meditation on the Golden Rule, Cheaters, and Prophets March 11, 2017 James Ford 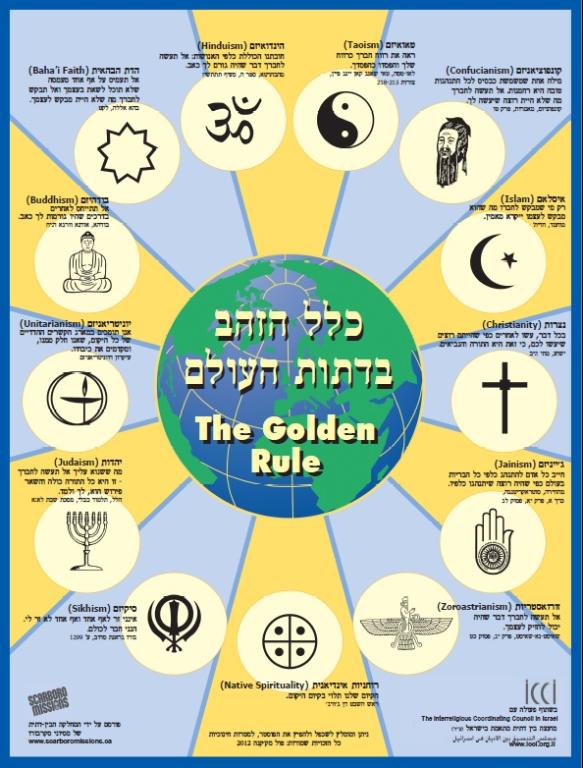 Jan and I were walking into the parking lot after a quick run to one of our local grocery stores, when we noticed a bumper sticker. At first glance it seemed one of those “co-exist” stickers with the letters twisted out of symbols from the world religions. However, as we looked more closely we could see it was a parody of that sticker and instead, while using world religions letters it read “contradict.”

I’m certainly okay with that. I mean, after all. But, then in smaller print was a citation of a popular chapter and verse from the Gospel of John. So, it appears the meta message here is that while the world’s religions do indeed contradict each other all over the place, there is, actually, among them, a true one. And, in case we’re confused, here’s a pointer to which one that is. Okay. We all have the right to an opinion.

But, I have to say, if I had to pick a true or, more accurately the truer one among the many, as fond as I am of my natal lineage, and how much the stories of the Bible have a place in my heart, it just wouldn’t be Christianity. In Arthur C. Clarke’s novel Childhood’s End there’s a kind of time machine, it can’t be used to travel, but one can look at the events of the past. Once people got to see how all the religions got going the only one left was a very modified and deeply simplified form of Buddhism.

Me, I think that would be true, although I believe a simplified form of Daoism based exclusively on the so-called “philosophical Daoists,” and a similarly pretty pared down form of Confucianism might be able to stand the scrutiny of that time viewer. I fear that’s it.

That said, I think that slogan “contradict” is important, and a wise complement, as well as challenge, to “cooperate.” Among the difficulties with the “cooperate,” is the implied “they all teach the same truth.” You don’t have to go very far into a study of comparative religions to know how deeply they are not all the same. And, even to make the claim, somewhere way, way down at bottom they are all the same is going to be rough slogging. Some believe in creator, some do not. Some see an end to time, while some do not. Some see souls and some do not. It’s pretty hard to find that very far to the bottom place where they are all the same.

But, there is one area where near as I can tell all the religions seem to in fact agree. Interestingly, most, maybe none consider it their primary teaching. But they all have it, and they all consider it pretty important. And that common thing is the Golden Rule, which most of us here in English speaking North America know in its formulation in the Gospel of Luke, in the King James version, as “do unto others as you would have them do unto you.”

The golden rule goes way back and it is found all around. As far as written records go some see it as far back as two thousand years before the common era in the Egyptian story the “Eloquent Peasant.” Reading it, frankly, I find that a stretch. The Odyssey, which might trace as far back as seven hundred years before the common era, has the goddess Calypso tell Odysseus she’ll be as careful for him as for herself, because she knows “what is right and fair.” Among the pre-Socratic philosophers of Greece both Thales and Pittacus of Mytilene, call us to not do that which we would not have done to us. And, while the rule isn’t particularly obvious in Socrates, Plato or Aristotle (although I thank them deeply for that other bit of gold, the Golden Mean), the current continues to pop up among the Greeks here and there.

The Hebrew scriptures with strata that approach the Eloquent Peasant’s composition although as we understand the text more likely written closer to four or five hundred years before the common era in Exodus we are admonished to not oppress the foreigner, and in Leviticus to straight out “love your neighbor as yourself.” It is found in the hadith, the recorded sayings of the prophet Mohammed, and throughout muslim and particularly Sufi literature. We can find the Golden Rule in the Dhamapada, a collection of sayings attributed to Gautama Siddhartha, the Buddha of history. Confucius, from about the same period, tells us in his Analects “not to do to others, what you would not want them to do to you.” And the list just goes on and on. There are Muslim, Jewish, and Christian version, there are Hindu, Jain, and Buddhism versions, there is a Zoroastrian version. The gold rule abides among them all.

Even in our more secular era, we see it continue to be presented. For instance, some see a philosophical variation in Immanuel Kant’s “categorical imperative,” “Act only according to that maxim whereby you can, at the same time, will that it should become a universal law.” And for me, even more intriguing, Charles Darwin, writing in the Descent of Man opines that “the social instincts – the prime principle of man’s moral condition – with the aid of active intellectual powers and the effects of habit, naturally lead to the golden rule. ‘As ye would that men should do to you, do ye to them likewise,’ and this lies at the foundation of morality.”

And it may be even reflect natural patterning. Donald Pfaff, author of the Neuroscience of Fair Play: Why We (Usually) Follow the Golden Rule, tells how he read a paper by William Hamilton and Robert Axelrod showing that they could teach computers to “behave in a according to what you could call ‘reciprocal altruism,’ a fair-play principle.

I’m moderately confident that the intuition that gives us the Golden Rule, and incidentally the Golden Mean, are built in, about as close to the hard wiring of our humanity as it gets. I am pretty sure it has something to do with our being mamas and herd animals. Although there is more to it, as the fact a computer can find a fair-play principle, suggests. Cooperation is critical to our survival.

And, yes, shall we say, of course there’s a fly in the ointment. This sense of fair does indeed seem to be built into our human consciousness. Generally we don’t need an admonishment for something we all do. And, at about an equal level of strength so is a predilection to cheat, to advance ourselves over others. Human beings constantly are doing things that hurt others.

And, of course, we need that sense of self and that impulse for survival and advancement. Both of these goods, taken to extremes become destructive. Although, frankly, while absolutely see people who miss that the care for one another also means themselves, the excess that is more common, and dangerous in many directions is the preservation of one’s self at all costs.

So, of course, the reality is we human beings live within a tension between these poles of our hearts.

And I suspect we may be looking at the deep structures of something else common among religions here. That is the problem of evil. Here we see something else common among the religions, a condemnation of the strong preying upon the weak. While there have always been a handful of people who value selfishness, I’m looking at you Ayn Rand, these have always been outliers. The overwhelming majority of human beings and our religions rest upon a foundation of cooperation, of looking out for one’s neighbors, of treating the other as we would treat ourselves.

But there is this conflict between selfishness and altruism. In some religions it becomes a cosmic war. And while in most good eventually prevails, I can think of at least one example where the forces of chaos eventually wins. The tension runs deep.

And, then, we can look around at the world we live in today. We have just elected a president who draws the smallest possible circle of who gets to be a neighbor, whose actions seem vastly more in concert with Ayn Rand than with Jesus, Buddha, or, for that matter, Darwin.

Now, in Jewish history in such harsh times when the rich put their boot on the neck of the poor, prophets arise and rail against the imbalance.

I consider these things, and I wonder if that prophet isn’t getting ready to stand in front of the White House?

It feels that time is at hand.

March 10, 2017
A Love Letter from the Deep: a Zen Reflection on Case 15 of the Gateless Gate
Next Post

March 12, 2017 Zen Teacher Desmond Gilna received Denkai Transmission
Recent Comments
0 | Leave a Comment
"Ive seen far too much of what Christianity has done and will continue to do, ..."
Brianna LaPoint Help Wanted: We’re Creating a progressive ..."
"this blog is supposed to be about Buddhism. See? this is why i dont like ..."
Brianna LaPoint Pilgrimages: A Mind Bubble on Spiritual ..."
"Ha ha, thank you, James!Yes, I think a good first book's main point may be ..."
Tim Macejak SINGLE BOOK ZEN: Zen Teachers Recommend ..."
"I agree with both you, Gary, and Tim, that Zen Flesh, Zen Bones is a ..."
jamesiford SINGLE BOOK ZEN: Zen Teachers Recommend ..."
Browse Our Archives
get the latest from
Monkey Mind
Sign up for our newsletter
POPULAR AT PATHEOS Buddhist
1