Nebuchadnezzar II Takes Jerusalem & With That Sets a Magical Stage 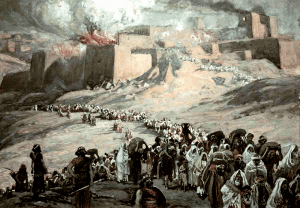 According to those good people at Wikipedia, following an eighteen month siege, it was on this day in the year 597 before our common era that Nebuchadnezzar II’s army breached the defenses of Jerusalem.

As this was in fact a revolt against him and a previously established “alliance” in a much larger conflict between the Chaldean or sometimes named Neo-Babylonian empire and Egypt, this time the king took drastic actions.

Two things. First, the Nebuchadnezzar Chronicles give us dates that are probably accurate. Something rather cool, considering how long ago this happened. The second is who those people were that lived in Jerusalem, and what would happen out of this critical event.

Jerusalem was the capital of the tiny kingdom of Judah. The people who lived in the city and environs were themselves something of a motley crew. And they were just one among a number of other peoples living in that area we now call Israel and Palestine. They appear to have been formed out of a rag tag band of refugees from various conflicts and abuses in the region who took refuge in the relative safety of the hill country. Somewhere along the line a small kingdom formed. It wasn’t a whole lot different than any of the others in that area.

Until, that is, Nebuchadnezzar and his Babylonian armies marched through. As often happened in those days, we’re talking the sixth century before our common era, after that siege which ended on this day by our best calculations two thousand, six hundred, and fourteen years ago, the conquerors took the cream of the local crop, the artisans, the poets, the intellectuals and carried them captive to Babylon. Oh, and they burned the temple in Jerusalem to the ground. They weren’t particularly planning on anyone ever returning.

And this is the good bit. While there by the shores of Babylon something magical happened. That story where Abraham migrated to Palestine, and later Jospeh had his coat of many colors, the Jewish people immigrated to Egypt, and then Moses led the now enslaved people back to their promised land? Totally made up. According to the best of contemporary scholarship, at least among those with no dog in the hunt, is that there was no Egyptian captivity, no Moses, no forty years wandering, and no military assault on the shores of the Dead Sea.

It was in Babylon that various folk stories that had been collected in the forming of Judah along with retellings of other stories some of them found in Babylon, others just made up on the spot all now made specific to this little group. It was there in Babylon that the now captive Palestinians began to weave together the stories we now know as the Exodus, retrojecting their condition unto another time and another place.

Actually, I love this story even more for not being so much a history lesson as the aspiration, as the dream of a crushed and dominated people seeking an identity and then in that creating out of their own human imaginations and hearts something quite wonderful. And, yes, the story has lots of tribal shadows, including dreaming vengeance on their enemies. As something also so human, I find warnings in that for myself, as well.

And then later with the fall of Babylon to yet another empire, these people now with a clear identity, and a sacred book of stories that helped to bind them together, returned to that hard land near the Dead Sea. And they began a tradition which included in it at first as a very small light, just a flickering candle, really, a dream of human unity before the face of a universal god.

All together a great song was composed by those waters of Babylon, the beginning of a universal message, a hint at a deepest knowing that in fact, we are all born to some great promise, something beautiful and common.

By the shores of the Euphrates they dreamed Zion into being. And in good time the god they imagined out of one among many would eventually become the binding reality, the one that connects all peoples. Again, lots of shadows. But, also something else.

Along the way it becomes a song of intimacy. Intimacy between all peoples. The universal message of our true connections, of our separation, and then of our coming home.

The story of our human condition.

And that I celebrate…

July 30, 2017 The World in a Blade of Grass: Reflecting on a Zen Koan
Recent Comments
0 | Leave a Comment
"James, thank you for this fresh breeze of truth. On Holy Saturday, all pretense is ..."
Robert Jonas The Zen of Holy Saturday: A ..."
"Thanks for this. Putting Amato and O'Brien in my queue. And so glad you included ..."
Zen Buddhism The Short Course in Zen: Five ..."
"love this James"
Roger Butts The Zen of Holy Saturday: A ..."
"The Ten Ox-Herding Pictures are fascinating and have everything in them that anyone needs to ..."
Jay The Fat Man and the Ox
Browse Our Archives
get the latest from
Monkey Mind
Sign up for our newsletter
POPULAR AT PATHEOS Buddhist
1