The Crush of History: Or, A Small Meditation Walking Through a Museum and Seeing My Life.

The Crush of History: Or, A Small Meditation Walking Through a Museum and Seeing My Life. August 6, 2017 James Ford 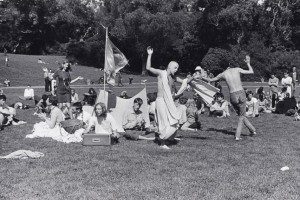 Yesterday Jan & I were in San Francisco for a wedding. The event was scheduled to take place in the Shakespeare garden in Golden Gate park. We decided to arrive in the mid morning and wander around the renowned de Young museum. And we did.

However, my fantasy of exploring their famous Asian arts collection was dashed when we arrived and learned that twenty-two years ago the collection was moved downtown to the Civic Center. Instead the major featured exhibition was a celebration the 1967 events in San Francisco and beyond that have come to be called the “Summer of Love.”

I was nineteen in 1967. And I was there. In 1967 I was working at Holmes Book Company in Oakland. I was that year still exploring the range of spiritual possibilities. It was in fact in 1967 that the former beatnik and now senior student of the Zen missionary Shunryu Suzuki, Sojun Mel Weitsman would found the Berkeley Zen. And the following year I would begin practicing at the zendo for about a year and a half before Houn Jiyu Kennett would come to America.

I still had half a thought that psychedelics might save the world. I fairly quickly discovered the answer was no. But in the mix I explored the range of spiritual options in the Bay Area, visiting the Vedanta Society in Berkeley, Monday Night talks by Stephen Gaskin, lectures by Tarthang Tulku, Chogyam Trungpa (I’m almost positive, although I have to leave the possibility open that this is a manufactured memory), Yogi Bajan, and a host of lesser known spiritual figures popular in the day.

A pivotal moment in my life. And, while Jan is a bit younger, and at that age those few years do matter, her life in Los Angeles would also be marked by aspects of that moment in time and space.

So, we were happy to go and take in the exhibition. The exhibit featured rock posters, and as the de Young’s official promotional tells us, “photographs, interactive music and light shows, costumes and textiles; ephemera, and and avant-garde films.” The same promotional site tells us how there may have been a hundred thousand young hippies gathered into the City at that moment in time. The walk through triggered a cascade of memories. I was not a devote of music, but I did at various moments see and hear the Grateful Dead, Jefferson Airplane, Big Brother and the Holding Company with Janis Joplin, and Country Joe and the Fish. And, I walked up and down in the Haight Ashbury more than once that year.

And there was the strangeness of witnessing my life become a museum exhibit.

Of course, that set me to thinking. Fifty years is a long time. At least for us humans. At the wedding I realized while there was a health grouping of people Jan’s and my age, for the couple getting married and their actual friends, that Summer of Love was as distant a thing as the First World War was to me in 1967. Exactly fifty years different.

I googled it and saw that it was in fact in April of 1967 that the US entered the Great War. The October Revolution that began the Soviet era in Russia began in 1917. And, on the strange and wondrous confluence of politics and religion, that year the renowned Theosophist Annie Besant would become the president of the Indian National Congress, which some years later would be taken over by Mohandas Gandhi as the institutional vehicle of the Indian independence movement.

I know I will not be alive in 2067, fifty years from now. But, I find myself wondering. What seeds of destruction, what seeds of creation are being cultivated at this moment. On the down side, the rush of population in the world has already moved to something unsustainable. Similarly, we do not seem capable of arresting the pouring of green house gasses into the atmosphere. Will those debts be called in by mother nature by that date? Who knows.

All around us I witness the possibilities for good and ill. Spiritually we might advance to something rich and multicultural. Or, we can turn inward, itself with both good and evil possibilities. And there is only a heartbeat of difference between spiritual and social. So…

I guess we do indeed live in the middle of that ancient Chinese curse.

August 8, 2017 Dogen Explains Zazen: Four Translations of the Fukanzazengi
Recent Comments
0 | Leave a Comment
Browse Our Archives
get the latest from
Monkey Mind
Sign up for our newsletter
POPULAR AT PATHEOS Buddhist
1