Holmes Book Company and the Beginnings of My Reading Life 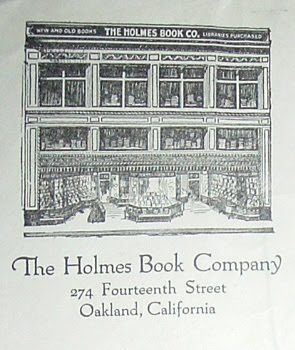 Considering all the dismal even dire possi­bilities facing a High School drop out, I was beyond fortunate to land that job at Holmes Book Company in Oakland.

It was the last standing of a three-store chain that dated back to the end of the nineteenth century. The main store, that last standing, was a big old three story building downtown; at the time I knew it beginning to go ramshackle. I started as a stock clerk, but quickly moved over to the sales floor.

It was located at 274 Fourteenth Street and was established in 1931. The business itself was started in San Francisco in 1894. For some years there would also be a branch in Los Angeles. The great and the literate were habitués of the shops. Carl Sandburg was particularly fond of the Oakland store. Larry McMurtry would write in his memoirs a description. It was “a wonderful large bookshop with a big wraparound balcony devoted to fiction. That balcony, not to mention the Holmes Book Company in general, could always reward as much time as I could give it.”

When I began working there I was advised the shop was haunted. Apparently the spirit had an unfortunate habit of throwing books around. Later I read the store was haunted not by one, but by two ghosts. I have to admit I don’t recall that detail from my own memories. And I never personally encountered either. Although on one occasion when upstairs in the stacks I did find what appeared to be a couple of books that might have been thrown across the room.

But there were spirits I did encounter in most intimate ways. They were definitely real if not precisely alive. These spirits came sheltered within the covers of books. It was here at Holmes books became major teachers for me. I’d read a lot of science fiction in my youth. Here I began to branch out. People made some suggestions, but mostly I just followed my nose. We had complete borrowing privileges, and I took full advantage of the opportunity.

One of those intriguing complex memories that continues to haunt me is me devoting some serious time to reading various versions of the Rubaiyat of Omar Khayyam. Unfortunately, I did this particular comparative reading during lunch breaks. And for a while my lunch was pretty much every day one of those little packets with crackers and a cheap cheese spread. As a consequence, today I can’t open a copy of the Rubaiyat without smelling that processed cheese.

More importantly, I stumbled upon William James. And then through him John Dewey. I was deeply persuaded by their pragmatic and realistic worldview. I was particularly impressed with that emphasis on naturalism. And starting with them I found the idea that things not only need to be looked at empirically, but to genuinely understand something we needed to add in some form of falsification as we considered it. I continue to consider this critical for anything asserted about the world within which we live.

Without that ability to posit a way some view of the “real” would be disproved, views are merely views. Interesting, sometimes. But… With falsification, well, then we actually begin to know things. And with William James I saw how this rigorous investigation could even be applied to one’s religious views.

More important was how it was reading these pragmatists I first encountered the power of genuinely not knowing as something important, not mere cynicism, but where doubt is meant to be experienced from the top of one’s head right down to the bottom of one’s feet and cutting through everything in between, and how that is the only gate to wisdom. I had my first intimations we only see through that glass, darkly.

Reading into James and his Varieties of Religious Experience, I started calling myself an atheist. But, at the same time I discovered Soern Kirkegaard. I recall a footnote from one of his translators, declaring that he wasn’t that bad a translator – it was just that the old master never seemed to have rewritten a word. So, it was rough slogging. But, atheist I might have been, I was also fascinated with that old Dane’s “leap of faith,” and what it might mean.

I also discovered two novelists who touched me and deeply. First I read Steinbeck’s Grapes of Wrath and then Dostoyevsky’s Crime and Punishment. From there I dropped even deeper into life through East of Eden and the Brothers Karamozov. Words, amazing webs of words. And conveyed by those words so much more. Worlds. New and compelling worlds.

I began to see some direction for my life. It had something to do with the spiritual quest. Beyond that I really wasn’t sure. But, that glimmer, what I’d call today, my first real glimpse of bodhicitta arose out of my reflections on Steinbeck and Dostoyevsky, although probably a bit more through Steinbeck.

I also stumbled upon Evelyn Underhill. Her wonderful book Mysticism put a lot in order for me, and corrected what I have come to feel are errors in William James’ approach to spirituality. I also read Richard Maurice Bucke’s Cosmic Consciousness. I began to find some outlines for a spiritual perspective at once large and natural. And, I discovered Paul Tillich, and particularly his The Courage to Be, as well as Victor Frankel’s Man’s Search for Meaning. When I discovered the Daodejing, they gave me way to read it.

And fiction. I read what caught my notice. I’d stopped reading science fiction, not with any intention, just stopped finding it calling, and began to look for other ways into understand the human heart. Possibly my most important novelist at this moment in my life was Hermann Hesse. I first read Demian, and then worked my way through most of his collected works, pretty much as they were translated into English. I continue to be haunted by Journey to the East, feeling it provided a map into the interior in surprisingly helpful ways.

The book trade was not only my alma mater providing me with a haphazard but ongoing education, it would be my principal way of paying the bills for the next twenty years. During this time I would work primarily as a clerk and general used book buyer. And this is most important. It was working within the book trade where I launched into my true intellectual education. As with most autodidacts, I followed my nose, and learned a great deal about what I was interested in, but very little about anything else.

Maybe the same is said of people with a more regular education. I wouldn’t know for sure. I was there about a year. Considering the number of books I read, I was surprised when calculating it all how brief my tenure there had to be. Also, of critical importance in my life while there I established a regular Zen practice. I began sitting at the Berkeley Zendo, I think actually just before I got the job, but it was close. When Houn Jiyu Kennett arrived in California I quickly became her student. After a while this would lead me to move to San Francisco and into the temple she established there, and with that leave Holmes.

The years have passed. So many years. Today, I continue to have fond memories of that year or so. Pivotal moment for me. And the work and more importantly the opportunities to read helped launch me.

Many bows to the spirits of that place…

July 31, 2017
Growing Up Television: My Nineteen Fifties Childhood
Next Post

August 2, 2017 Reinhold Niebuhr's Uncomfortable Challenge: A Zen Buddhist Reflection
Recent Comments
0 | Leave a Comment
"I have it on reliable authority (i.e., you) that Dogen himself wrote:Coming, going, the waterbirdsDon't ..."
cushing Recalling the Buddhist poet and general ..."
"Is this the Daido Loori video you mean? (You've linked twice to Daisin Morgan). https://www.youtube.com/wat..."
Kenneth Sutton Zen Meditation: Basic Instructions
"Rev. Hunt was my Great Grandfather. I was blessed to have spent time with him ..."
William Hunt Bennett Ernest & Dorothy Hunt: Early Links ..."
"Alan Watts. I happened to purchase "This is It" primarily because of the unique book ..."
Ed Papson Recalling the Trickster Sage Alan Watts
Browse Our Archives
Follow Us!