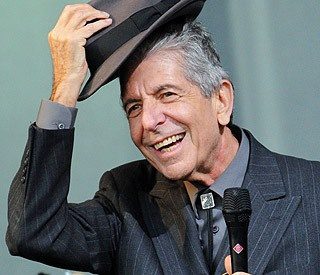 Leonard Norman Cohen was born on this day, the 21st of September, in 1934, in Westmont, an English-speaking enclave of Montreal. His mother was the child of a renowned rabbi and scholar, his father the son of a founder of the Canadian Jewish Congress and its first president. The family was Orthodox and the themes of Judaism would become currents that informed his full life.

The family was upper middle class, his father a successful clothier. Although Leonard’s father’s death when he was nine interjected an element of sadness and the heavy realization that life was insecure into his early life. But, their lives were not financially precarious.

He entered McGill University in 1951, joined the debating union, eventually becoming its president and winning literary competitions for his poetry. His first poems were published while he was still an undergraduate. His first book, a collection of poetry, Let Us Compare Mythologies was published in 1956.

Supported by a small trust fund, Cohen was able to focus on his writing. His second book, another volume of poetry, Spice-Box of Earth was published to critical acclaim in 1961. He purchased a house in Hydra, in the Greek Saronic Gulif, and continued writing, publishing poetry and his first novels, the novels to mixed reviews. None sold particularly well.

In 1967 he moved to the United States, where he began to write songs. His first album, Songs of Leonard Cohen was published in the same year. From there, well, the short version was there were successes and failures. On balance more successes.

And, of course, he would become the first Buddhist poet laureate of in the West. That he was a JewBu, a part of the magnificent tribe of Jewish Buddhists was, to my mind particularly appropriate.

In 1994 Cohen entered the Rinzai Zen monastery at Mt Baldy near Los Angeles, where he remained for five years, eventually ordaining as a Zen priest. Without, it should be noted, ever rejecting his Jewish connections. As has been observed, Cohen’s religion was “additive,” he never felt a need to reject truths wherever he found them.

Notoriously during these years his long time manager embezzled the bulk of his savings, by some accounts about five million dollars, leaving him with about a hundred and fifty thousand dollars to his name. In 2005 he sued, and the court found in his favor. He never collected anything.

So, he began a series of tours to recoup some money for his old age and hopefully for his estate.

Fortunately for him and his family, and, yes, all of us, Leonard Cohen was wildly successful. Jan & I were fortunate enough to hear him twice during these later years. Joining us, I need to add to a legion of grateful fans and admirers.

Leonard Cohen died on the 7th of November, in 2016, in Los Angeles. He was eighty-two. He was survived by several lovers, a son Adam, a daughter Lorca, and three grandchildren. His funeral, performed with Jewish rites, was held in Montreal and he is interred there in a family plot.

My friend Fritz Wendt points to Cohen commenting on perhaps his most beloved song, Hallelujah.

“Finally there’s no conflict between things, finally everything is reconciled – but not where we live. This world is full of conflicts and full of things that cannot be reconciled, but there are moments when we can transcend the dualistic system and reconcile and embrace the whole mess and that’s what I mean by ‘Hallelujah’. That regardless of what the impossibility of the situation is, there is a moment when you open your mouth and you throw open your arms and you embrace the thing and you just say ‘Hallelujah! Blessed is the name.’

And you can’t reconcile it in any other way except in that position of total surrender, total affirmation. That’s what it’s all about. It says that you’re not going to be able to work this thing out. This realm does not admit to revolution. There’s no solution to this mess. The only moment that you can live here comfortably in these absolutely irreconcilable conflicts is in this moment when you embrace it all and you say ‘Look, I don’t understand a fucking thing at all – Hallelujah!’ That’s the only moment that we live here fully as human beings.”

Thank you, Leonard Cohen, for pointing us so true on the great way…

What can I say? Well, other than

September 20, 2017
Drafting a Manifesto for a Western Zen Buddhist Sangha in the Twenty-First Century
Next Post

September 22, 2017 A Feast for a Zen Master: Recalling Master Dogen
Recent Comments
0 | Leave a Comment
Browse Our Archives
Follow Us!