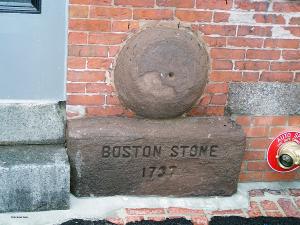 There used to be a joke about Unitarians. It went, as unlikely as such a thing would be, that if the Unitarians were ever to embrace a creed, it would no doubt be (in the pre-inclusive language of the pre-consolidation with the Universalists day when the joke was coined): “I believe in the fatherhood of God, the brotherhood of man, and the neighborhood of Boston.”

I have never lived in Boston. And, in fact I’m Californian to the bone. But, Jan & I did live in New England for fourteen years, while I served in two Unitarian Universalist congregations, one an inner ring suburb of Boston, the other in glorious Providence, and Jan became research librarian at Perkin’s School for the Blind in another Boston inner ring suburb, and we can testify: no doubt the cultural orbit definitely spun around what certain New Englanders are pretty sure is in fact the navel of the universe. (The exact spot pictured, for those interested…)

Like many great cities it has a checkered history. It has never been good with issues of race, and there are particularly shameful moments in its history.

And there is so much I love about that town. We were fortunate to be resident during the time when the Red Sox overcame the terrible curse, and while no particular sports fan I now have the windy memories of Fenway Park chilled into my bones. We were there during the tragedy where planes taking off from Boston were hijacked and used to take down the twin towers. And we were in New England when the Tsarnaev brothers set off those brutal bombs at the marathon. On numerous occasions I stood in front of that statue honoring the Massachusetts 54th and contemplated what price freedom. We experienced the legalization of marriage equality while there. Well, the list just continues. Boston, ancient and today, is no doubt a center of the universe.

For me, Boston is a holy city. Maybe the holy city.

For as long as I live, Boston and Massachusetts will have a place in my heart, a part of my being.

In 1630 the Winthrop fleet of Puritan settlers arrived in what is today Salem, moved on to what is now Charlestown, and finally found the ideal spot to plant their city on a hill. So, today, the 17th of September (by the “old calendar” it would be the 7th), the town of Boston was founded.

September 16, 2017
The Problem of Our Suffering: A (Modernist) Zen Buddhist Meditation
Next Post

September 18, 2017 Three Pointers on the Zen Way: One by a Buddhist
Recent Comments
0 | Leave a Comment
Browse Our Archives
Related posts from Monkey Mind 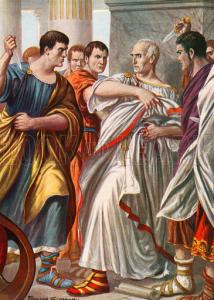