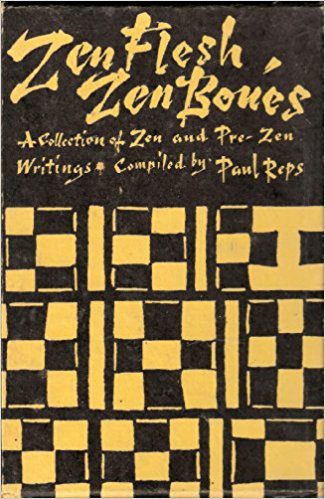 Okay, maybe one Buddhist and a spiritual pilgrim deeply sympathetic to Zen.

In Nyogen Senzaki and Paul Reps little charmer, Zen Flesh, Zen Bones, near the end they address the question “What is Zen?”

They say one answer would be:

Inayat Khan tells a Hindu story of a fish who went to a queen fish and asked: “I have always heard about the sea, but what is this sea? Where is it?

The queen fish explained: “You live, move, and have your being in the sea. The sea is within you and without you, and you are made of sea, and you will end in sea. The sea surrounds you as your own being.”

Okay, they give a second answer, as well. A bit too cute for my current tastes. But, then, you know, maybe just what the doctor ordered.

That explanation is this:

October 20, 2017
Zen at the End of Times: A Small Meditation on Despair & Gratitude
Next Post

October 22, 2017 Some Pointers on the Inner Way: Paul Reps' Vijnana Bhairava Tantra
Recent Comments
0 | Leave a Comment
"An excellent essay, and a necessary one. I quibble about the UU T-shirt which says, ..."
Ohyetwetrust CHANGE & NOT KNOWING: Darwin, Huxley, ..."
"I appreciate your acknowledgement that since you didn't know the source of most of the ..."
Harold Wood Recalling John Muir, Nature Mystic, and ..."
"I purchased "This is It" back in 1974 simply because of the paperback cover. Now ..."
Ed Alan Watts Turns One Hundred & ..."
"One basic error of every "optimistic" philosophy is thinking that humans are evolving into more ..."
bill wald ALL BEINGS, ONE BODY: A TRUE ..."
Browse Our Archives
Follow Us!