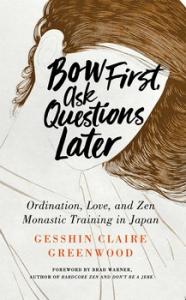 San Francisco native Claire Greenwood was raised within the American Vipassana Buddhist community centered at Spirit Rock in Marin County. When she graduated from college in 2009, she went to India on a pilgrimage of self-discovery.

There she took the opportunity to temporarily ordain within the Theravada tradition as a nun in Bodhgaya. Soon after she made her way to Japan where she spent six months in Toshoji Senmon Sodo.

Claire briefly returned to the United States. Then when she returned to Japan, she ordained as a novice Soto Zen priest with Seido Suzuki Roshi, abbot at Toshoji. Claire was given the ordained name of Dian Gesshin.

Over the next five years, three at the renowned Aichi Senmon Nisodo under Shundo Aoyama Roshi, Gesshin lived the always intense and often harsh life of a traditional Japanese Zen training monastic. In 2016 she received dharma transmission from Suzuki Roshi. Two years later she completed Zuise at Eiheiji and Sojiji monasteries, fully authorizing her as a Soto Zen priest.

Toward the later part of her years in Japan she began blogging as That’s So Zen. I believe I was among the first dozen or so people to begin following her blog. I was instantly enchanted. First I was caught up with her writing, which I found bold, if on occasion dancing at the edge of reckless. But, right after that I was taken over with her authentic insight all tangled up inseparably with her youthfulness.

When Gesshin returned to the United States I was thrilled that she ended up doing an MA at the University of Southern California. Here while still separated by the LA metroplex we were close enough to begin working together on my heart’s work, an emerging Zen community aligned with the Soto tradition but equally concerned with being a North American place of practice, and one engaged in the questions of our time and place. 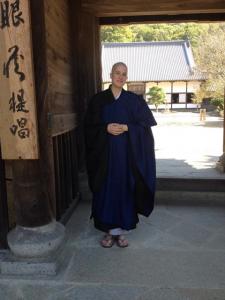 I watched the birthing of this book. And, as it came toward completion I stood in awe. She remains bold, and she continues to dance at the edge of reckless. And, I don’t see how it can be, but her writing gets ever better.

As Zen priest and author Ruth Ozeki says, “with rigor, honesty, hilarity, and joy, Gesshin shows us how to grapple with the great matter of life and death – as well as with less matters, like capitalism, sexism, religious dogma, sex, love, fashion, and Kyoto nightclubs.”

Gesshin’s book opens with a threat, as most good Zen books should, and then promises the reader “a story about a young girl on a silly quest for enlightenment, about her many loves, (and) about how she learned to make the best cup of tea in Japan.” And with that, as they say, the hilarity begins.

We are invited into a spiritual adventure told in a voice that has not been heard from a lot – a young, brilliant, woman. Here we also are invited into the life of a new generation. With Bow First, Ask Questions Later Gesshin Greenwood becomes the first Millennial to offer a spiritual memoir. And, if she’s representative of any significant percentage of her generation, I feel stirrings of hope for our larger community.

With brutal honesty, she examines herself as a white privileged female who became obsessed with what is true, what is real as a little girl – and who continued with that current running through her life even as she lived the life of a North American, Californian San Franciscan. So, of course there’s sex. And, of course, there’s serious intellectual engagement with the matters that Buddhism cares about: life, death, our actions and thoughts, and their consequences. And, with that, a lot about pain. And with that, an obsession with enlightenment. 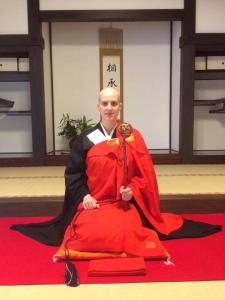 She explores her working with her teachers. I found her account of Suzuki Roshi compelling and deeply complicated. I was profoundly impressed by her account of Aoyama Roshi and those three years in a woman’s convent. Gesshin engages the matters of Zen’s precepts, particularly as they manifested in her monastic life. “The day before I ordained as a nun, I asked Seido Roshi ‘What does it mean to be a nun?’ He said, ‘You’ll know after you become one.’” The title of Gesshin’s book speaks to the mystery of the practice. Bow first, ask questions later. Sort of the whole story…

And with that the intimate way is revealed. It turns out to be messy, foolish, and have I used the word reckless yet? All of that. And Gesshin takes us through the various things that happen when you bow, and with the many questions that follow.

And we even begin to get some of the answers.

This is a start to read and you will have serious trouble setting it down sort of book.

I recommend it to anyone interested in the authentic Zen life, the messy one, the one you actually get to live. Toward the end of the book, she writes about, well, read the book to find that out. But, she says something, that I think summarizes much. “I knew the feeling wouldn’t last, but I didn’t care. I held the feeling in my palm, like a ray of sunshine that was fading, and I laughed out loud at how simple joy was.”

While Gesshin and her wonderful spouse Gensan Thomson will be returning to the Bay Area later this summer, I expect our collaborations will continue. What I am sure of, is that Gesshin Greenwood will continue to touch not only my heart and life, but many others, as well.

April 18, 2018 Gary Snyder Points to the Ancient and Modern and Future Paths of the Buddha Way
Recent Comments
0 | Leave a Comment
Browse Our Archives
get the latest from
Monkey Mind
Sign up for our newsletter
POPULAR AT PATHEOS Buddhist
1