No Zen Masters in the West 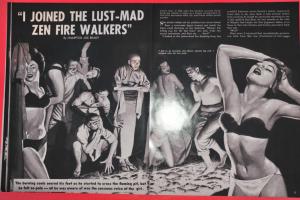 The other day on one of the Facebook pages I follow there was a little brush up when someone asserted there were no Zen masters in North America. He was someone who it appears had studied for some years in Japan. And, I think he meant there were no officially recognized Zen masters in the Rinzai tradition in North America. Although it did sort of feel like he was also implying no “real” teachers of Zen. At least it did to some of the other folk on that page.

And, so, of course, he was pushed. And, I felt he responded with some grace, although he wasn’t prepared to back off his fundamental assertion. He went into what it means to be an official Zen master. And among the many other things, it includes a lifetime residence within a Zen cloister, people devoted to the great project through a single minded practice, forsaking everything else. While he went on to acknowledge there are Zen teachers in the West, well, they all fell short of that tiny number who should be called “masters.”

There is no doubt he speaks truth in several senses. There are maybe thirty people in Japan, probably fewer, who are recognized institutionally as Rinzai Zen masters, Shike or Roshi. Actually, this is true within Soto, as well. There are also no more than about fifty Soto priests holding their version of the Shike rank. And, there has never been a North American to hold this rank. (Although one American is a jun shike, the rank immediately below, who currently lives in retirement in Pennsylvania.)

This set me to thinking about various things. First, how its true, we in the West do not have any Zen masters of that institutional rank. A couple visit. None reside here. And, here is a truth: I believe they bring a quality of presence that is unique. There is something wondrous to be found within a lifetime commitment to that single thing.

While I believe there is a quality one finds in Shike teachers, both Soto and Rinzai, that is unique, the rank is also basically institutional. And, beyond that another important question: is a lifetime within a cloister the only way to prepare a Zen teacher? Or, and, this is pushing the matter even harder: Is a lifetime in the cloister the best way to prepare a Zen teacher?

Challenging and potentially deeply rich questions. At least I find. Now, I have little doubt there are some basic requirements for someone who wishes to represent the Zen way as a teacher. Without which I just don’t see how they can use the word “Zen” for what they teach in any honest way.

But, what an institution can require makes what I would call a journeyman, a genuine practitioner of the way. And, people who have adequate preparation to help people practice Zen. And, mastery, well, that’s something beyond the ability of any institution to designate except in the most nominal sense. Said, I hope it is obvious, and if it isn’t, let me assert with genuine respect for those many shike of both Japanese Rinzai and Soto traditions. Mastery and mastery. Lots of different kinds of mastery.

And, with that I’m fascinated with what is emerging here in the West, especially as I can see it in North America. Here the cloister is no longer assumed. And, in fact, nearly impossible to live. The very cloisters that exist here are precarious institutions, none that I can think of can in fact guarantee a lifetime home. So, nearly everyone has to assume at most a period of retreat, a weekend, a few months, a few years, and then eventually back into the world. One way or another.

And, I can’t say this is a bad thing. The practice isn’t to crush us, but to see through the mystery, to learn to live with the dual truths of form and emptiness.

In the Soto tradition there are now minimum times within the cloister being discussed. Some say at least two ango, ninety day residential training periods, which match the Japanese Sotoshu requirements. Among the many other expectations. Among many other expectations. Some say one ango, some, and with caveats this includes me, suggest that instead of ango, retreat days are counted. I am among those who suggest under most circumstances no one should be guiding others on the Zen way who’ve not, again, among those many other expectations, have sat a good three hundred days of traditional Zen retreat – nine, ten, or more hours of supervised sitting meditation each of those days. It is critical to formation. And, it is a different formation than a lifetime in the cloister. Or, even a year or two, or even an ango or two.

Of course the deal is seeing through. Recently I saw on Facebook a sculpture. From the side it was a large human head. But straight on it was just slices of metal, almost invisible. And that’s almost it. From one angle the mess of the world. From the other emptiness. But, not quite like the sculpture, in this case both are exactly the same. Although those words don’t quite do it, either.

Form and emptiness. Not one. Not two.

But, I have lived long enough into the Zen way to see several forms of expression that look authentic, that seem to have transformed lives. What I’m witnessing are individuals who train in these various ways who emerge first and foremost as mature practitioners of the ancient and present way. And, some among them are becoming wise counselors. And, of course, as has always been the case, there are rogues and mountebanks. The robe can hide a multitude of sins. So, caveat emptor. And, in between rogue and sage, many, many people with titles but uncertain skills.

And. And. Among that great cloud of witnesses to our way are some who may deserve the title of master.

Rich and complicated times, these.

That said, I also find myself thinking of that koan collected in the Blue Cliff Record. You know, the real matter. The thing that the masters are all about.

Huangbo is one of the great teachers from the mythic origins of the Zen way during the Tang dynasty. It’s uncertain when he was born, but he died in 850. He was a successor to the great Baizhang Huaihai and his most renowned successor was Linji Yixuan who is considered the founder of the Linji or, in Japanese the Rinzai school.

Beyond being enormously tall very little more is known about him. The collection of his teachings, the Ch’uan-hsin Fa-yao, unlike other traditional collections contains no biographical details beyond those that can be inferred from the recorded dharma encounters.

What we have are his teachings. And, well, his successors, particularly as they flow through and become Rinzai Zen. And this case is a delicious example.

So, he is berating an assembly of monastics. The tradition in those days was between the formal training periods they would wander from monastery to monastery, meeting masters of the way, encountering peers, and, of course that occasional tea lady who might shake the foundations. He was reminding them of a hard truth. Ultimately we must turn that light inward.

And the proof of the pudding is how you meet someone in the grocery store.

When we talk about masters and teachers and all of that, like the leading paragraphs of this little reflection, we might forget what its all about. And, with that some of the basic promises of the way. One is that we all have what it takes. We need only to stop, to sit down, to shut up, and to notice. Then the ten thousand things stop being our projections, and instead become the very truth of our lives.

Or could the invitation be somewhere else?

We’re all at the edge of falling into awakening. Every moment. With every breath. In ancient China. In medieval Japan. In our contemporary California. Time flows. Time dances. Then. Now. Future.

Let go of it all. Just for a moment. Don’t worry, it will return.

But, in this moment, can you find that place where there is no master, there is no teacher? And, of course, no student?

Huangbo slaps his stick in his hand. He glowers, all seven feet of him.

Is this the moment?

April 18, 2018
Gary Snyder Points to the Ancient and Modern and Future Paths of the Buddha Way
Next Post

April 21, 2018 Ten Rules for Social Engagement: A Zen Priest Ruminates on Promise & Peril
Recent Comments
0 | Leave a Comment
Browse Our Archives
get the latest from
Monkey Mind
Sign up for our newsletter
POPULAR AT PATHEOS Buddhist
1