Learning the Language of Dragons: An Introduction to Zen Meditation & Especially to Koans

Learning the Language of Dragons: An Introduction to Zen Meditation & Especially to Koans June 5, 2018 James Ford 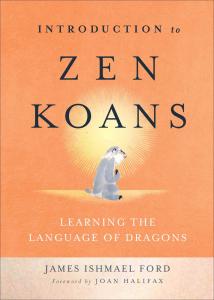 Today the 5th of June is the official publication date of my book Introduction to Zen Koans: Learning the Language of Dragons.

There is a story about a man in ancient China who loved dragons. Unlike dragons in Western culture, who guard hoards of treasure and menace maidens and villages, dragons in China, while dangerous, are also carriers of great wisdom. In the Zen way, they’re often used as a symbol for our deepest wisdom. In this story, the man was fascinated with the idea of dragons. He studied them, collected art objects that featured them, and even dreamed about them.

Somehow the king of dragons heard of this man and decided to reward him with a visit. He thought he could tutor the man in the language of dragons, the language of ultimate reality. When he arrived the man was asleep in his bed. And so the dragon settled itself at the foot of his bed, curling its long tail and sitting quietly. When the man awoke and saw the dragon he was terrified. He grabbed a sword and waved it at the king of the dragons.

Disappointed, the dragon flew up and returned to the mysteries.

Presumably, if you’ve opened this book, you have an interest in Zen and its practices. And the language of Zen is the language of dragons. This book is about learning that language. It is essentially a meditation manual that explores three things. The first thing is Zen’s meditation disciplines. The second thing is an understanding of the great insight that lies at the heart of those disciplines, like that curled dragon. And third is the way in which Zen’s meditation disciplines are part of a large context of practice, a great Middle Way, which is ignored at some peril. Think of these as the various parts of the grammar of this language of the wise heart. They each inform the other and give us the Zen way.

Mastering this language isn’t easy. In fact, it can be disturbing, on occasion even terrifying, to open ourselves as fully as this way does. These practices reveal treasures. And they reveal secrets. Sometimes these secrets too are terribly painful. So, there are perhaps good reasons that man who loved dragons in the abstract found their reality so distressing. After all, Zen deals with the fundamental matters of our human hearts, and, while powerful and transformative, Zen as a way of life also plays rough with our ideas of who and what we are.

That’s the language of dragons.

The book is basically a Zen meditation manual with an emphasis on the Zen koan.

Introduction to Zen Koans is available at either the publisher or Amazon. Sadly, there are fewer and fewer general bookstores, and fewer yet of those with a decent selection of Buddhist titles. But, if you are blessed with such a store in your neighborhood, they may have it. And, if not, perhaps you’re of a mind to suggest it to them.

June 7, 2018 Kyogen Carlson Roshi, "Notes on Zazen Practice"
Recent Comments
0 | Leave a Comment
"this geelong seafood blog is great. geelong seafood"
John N LIVING IN THIS FLOATING WORLD: A ..."
"https://www.youtube.com/wat..."
Robert Flannery Narcissus Drowned: The Zen Priest Takes ..."
"long live Theo-poetics! and universalism! and so on and so forth!"
Roger Butts That New Universalism: A Smallest Meditation ..."
"Thank you, James. You explained prayer to me as a way even I could accept. ..."
Ohyetwetrust A Meditation on What My Grandmother ..."
Browse Our Archives
get the latest from
Monkey Mind
Sign up for our newsletter
POPULAR AT PATHEOS Buddhist
1