The Spiral Dance of Zen Practice, Awakening, and Ordinary Life 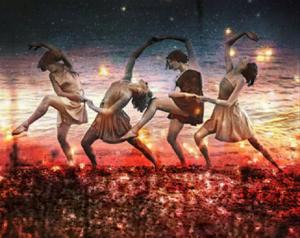 The Spiral of Awakening.

An old friend tells about when he lived in a Zen monastery for a time they were visited regularly by a Catholic monk who was a well known spiritual director and confessor to a convent. My friend was the attendant to the Zen abbot during a visit where over tea the monk said, “It is so good to come to a monastery where so much training is going on.” The abbot smiled. Then the monk added, “Everyone seems to be in training, except of course you.” The conversation did not go well from there and the monk never visited again.

I think about that. About practice. About Zen practice. And, I find myself reflecting on the nature of Zen’s awakening. In the Soto school the master Eihei Dogen coined a term “dokan,” the “circle of the way” to describe the unity of practice and awakening. In his majesterial study Gyoji (in Kaz Tanahashi’s translation) the master tells us:

And, I find myself reflecting on how it can also be seen as one continuous mistake, a popular term in Zen here in the West. In all likelihood the source of that particular phrase is the Zen master Shunryu Suzuki, who wrote in Zen Mind, Begninner’s Mind:

“When we reflect on what we are doing in our everyday life, we are always ashamed of ourselves. One of my students wrote to me saying, “You sent me a calendar, and I am trying to follow the good mottoes which appear on each page. But the year has hardly begun, and already I have failed!” Dogen-zenji said,’ ‘Shoshaku jushaku.” Shaku generally means “mistake” or “wrong.” Shoshaku jushaku means “to succeed wrong with wrong,” or one continuous mistake. According to Dogen, one continuous mistake can also be Zen. A Zen master’s life could be said to be so many years of shoshaku jushaku. This means so many years of one single-minded effort.”

The spiral of awakening.

The critical point, what we find within the Zen way, what we discover in every instance where we wake into reality, is that it is all not-two. The mind body divide. The material spiritual divide. The practice not practice divide. The self other divide. Not one. Not two. Or, for shorthand, not-two.

In fact on our way there is no hard division between any of these things. They are all connected. So, Dogen’s circle of the way is in my experience actually more a spiral. As was said of history, it doesn’t repeat, it rhymes. So, not precisely a circle, more a spiral. Our own practice in its cycling, as I see it, as I experience it, is never fully a returning to something that was before. But it, well, it rhymes.

The critical point is there is no ultimate discontinuity of practice, life, and awakening. Everything is connected even as everything changes.

For me this pointing opens a number of issues.

For one, that abbot. Now, there are many legitimate reasons why anyone, even an abbot might not be doing precisely the same practice as others in the community. Again, there is that rhyme thing. I know in retreat I spend a lot of time in the dokusan room rather than on the pillow. But, I personally suggest a Zen teacher who is not sitting regularly is walking into dangerous territory. And so, even understanding that dokusan room is zazen in some very real ways, I also try to make sure I get significant pillow time during retreat.

Within the spiral of awakening my sitting changes, but sitting continues.

But, there’s something else, as well. For me it is also critical to recall that awakening and ordinary life are also intimately connected. Waking up is not stepping away from the mess that is our lives.  If we can’t balance our checkbook, we will not all of a sudden be able to do so. If we have a problem with alcohol, it isn’t going away with kensho.

It’s all perfect. And, well, we do indeed have some more work to do.

Kensho is an eruption of the not-two into our individual consciousness. In some great gift from the cosmos, we just notice as reality unfolds. And, it will still be so, even as our lives move away from that moment and circumstances overtake us and our attention. But, it also passes. Awakening is not some steady state. It is that dance. It includes it all. Including forgetting.

So, the take away in this small reflection on the spiral of awakening?

Hold it all lightly. But, turn away from none of it. Sit. Work. Love. Hold all gently.

The circle, the spiral, the endless dance.

Not one. Not two.

June 10, 2018 Somewhere Over the Rainbow: The Smallest of Zen Reflection on the Original Koan
Recent Comments
0 | Leave a Comment
"this geelong seafood blog is great. geelong seafood"
John N LIVING IN THIS FLOATING WORLD: A ..."
"https://www.youtube.com/wat..."
Robert Flannery Narcissus Drowned: The Zen Priest Takes ..."
"long live Theo-poetics! and universalism! and so on and so forth!"
Roger Butts That New Universalism: A Smallest Meditation ..."
"Thank you, James. You explained prayer to me as a way even I could accept. ..."
Ohyetwetrust A Meditation on What My Grandmother ..."
Browse Our Archives
get the latest from
Monkey Mind
Sign up for our newsletter
POPULAR AT PATHEOS Buddhist
1