Somewhere Over the Rainbow: The Smallest of Zen Reflection on the Original Koan

Somewhere Over the Rainbow: The Smallest of Zen Reflection on the Original Koan June 10, 2018 James Ford 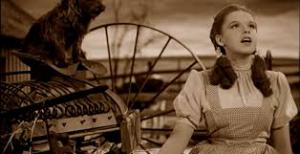 I see that Frances Ethel Gumm was born today in 1922.

Most of us know here better as Judy Garland.

Noticing this triggered a recollection of the Wizard of Oz and particularly one song.

Roger Ebert wrote, “The Wizard of Oz has a wonderful surface of comedy and music, special effects and excitement, but we still watch it six decades later because its underlying story penetrates straight to the deepest insecurities of childhood, stirs them and then reassures them.”

Given that the film was released in 1939 when the world was already moving from a global depression into a global war, the anxiety it addressed was deeper even than our childhood fears. And, which, I believe, is one reason the Wizard of Oz continues to haunt us with dreams of something better, something hopeful over the rainbow. And, particularly, I think, of that one song…

There have been endless covers. Some quite heartrending…

Maybe we’re more aware of that longing for something during hard times.

But, I think perhaps that sense of longing is the great common human experience. It is the source of all religion, the thing that drives all hope.

Of course, there is a secret hidden within that longing. And it is the thing which I find offers a magical moment in that original film.

So, the great question.

Where is that secret place of the heart?

Where is it really?

June 9, 2018
The Spiral Dance of Zen Practice, Awakening, and Ordinary Life
Next Post

June 13, 2018 "I Am Certain of Nothing" A Small Reflection on the "Zen" Wisdom of Anthony Bourdain
Recent Comments
0 | Leave a Comment
"this geelong seafood blog is great. geelong seafood"
John N LIVING IN THIS FLOATING WORLD: A ..."
"https://www.youtube.com/wat..."
Robert Flannery Narcissus Drowned: The Zen Priest Takes ..."
"long live Theo-poetics! and universalism! and so on and so forth!"
Roger Butts That New Universalism: A Smallest Meditation ..."
"Thank you, James. You explained prayer to me as a way even I could accept. ..."
Ohyetwetrust A Meditation on What My Grandmother ..."
Browse Our Archives
get the latest from
Monkey Mind
Sign up for our newsletter
POPULAR AT PATHEOS Buddhist
1