“I Am Certain of Nothing” A Small Reflection on the “Zen” Wisdom of Anthony Bourdain June 13, 2018 James Ford 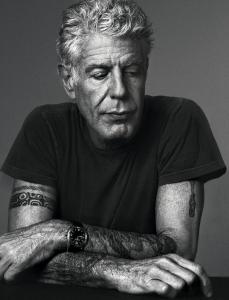 Me, I’ve long been a fan of Anthony Bourdain. I found his approach to food and travel and the ways he could dig into the contours of our human condition extremely compelling. So, I was particularly sad when he died, apparently the victim of depression. Something that echoes for me the deaths of too many men in my family.

There are those who made sure we know he wasn’t universally loved (examples here and here). The truth is how vastly more people were moved by his profound humaneness and his call for people to enter into what my Christian friends sometimes call table fellowship.

There is a profound spirituality in that gathering together around food. Maybe it is the most basic of our human points of connection. So, of course, people are going to fight about it, about how best to do it, about what is right and wrong in doing it. And, and, there is that call back to our coming together, being together, present to the harsh and beautiful that is our life.

For me what was so important about Bourdain was that he was an exemplar of a kind of secular spirituality, maybe even the best of what a secular spirituality might be. I gather that while his mother’s family was Jewish and his father’s Catholic, he was raised irreligious. He would later describe himself as an atheist. Although it was pretty obvious his atheism did not have the hard edge of the contemporary “new atheists.” Rather he simply did not believe in a deity, more along the lines of what are sometimes called non-theists. And it is worth noting how the Wikipedia article on non-theism concludes with a pointer to non-theist religions.

Yes, there is a Buddhist connection, at least passingly. Eric Ripert, who had the terrible fate of discovering Bourdain’s body, was one of his friends, actually perhaps Bourdain’s closest friend. And Ripert is a longtime convinced Buddhist. No doubt this was a part of many of their many conversations. But, frankly, Buddhism is just part of the mix within our contemporary Western secular culture. You don’t have to watch or read a lot of Bourdain to know he had somewhat more than a passing familiarity with Buddhism. (See the video below as an example…)

Putting it all together I think Anthony Bourdain represents a common enough attitude of a well-read and in his case well-traveled individual. He was someone with a fondness for humanity inspite of all those many reasons not to – he evidenced some deep and visceral love for us and this world. His was a generous, if on occasion jaundiced view of who and what. All of it captured in a quote I’m seeing around the inter webs, captured from an episode of No Reservations, when he visited Machu Picchu, a Mecca for New Age spiritualities.

He began by noting, “The more I become aware of, the more I realize how relatively little I know of it, how many places I have still to go, how much more there is to learn.” That’s the least cited part. It’s the following two sentences that have the most play:

“Maybe that’s enlightenment enough — to know that there is no final resting place of the mind, no moment of smug clarity. Perhaps wisdom, at least for me, means realizing how small I am, and unwise, and how far I have yet to go.”

Me, I think it a beautiful statement. And profound. I agree with much of it.

I do find the “smug” problematic. Clarity cannot be smug. But, I do get he’s probably speaking of a type of person I know rather well, an advocate of presence who has turned “it” into something other than what it actually is. No longer a dynamic but now a product, a thing. I think of that “smug clarity” like those selling a spirituality at Machu Picchu – long on crystals and spiritual highs and short on relentless presence to what is. There is a lot of cheap religion. There’s a lot that is sold as spirituality that serves no good purpose.

And, there is something profoundly true that informs religion, that inspires spirituality. And it sure seems to me that Anthony Bourdain touched it. I stumbled on an unsourced quote attempting to sort out Bourdain’s life philosophy. “Life is complicated. It’s filled with nuance. It’s unsatisfying… If I believe in anything, it is doubt. The root cause of all life’s problems is looking for a simple fucking answer.” One could call this a secular Buddhist analysis. Even a secular Zen Buddhist analysis, particularly with that emphasis on doubt.

Doubt is, admitedly, not part of all religion. Although I suggest it is the secret heart of religion. As a practitioner on the Zen way it is doubt that drives my path. I was pleasantly surprised to stumble upon an article where Bourdain actually cites “beginner’s mind,” a Zen term of art made famous by the American Zen Buddhist missionary Shunryu Suzuki. One more passing connection between Bourdain and Buddhism, and, if you will forgive this, the taste of Zen.

And it certainly looks like Anthony Bourdain understood this down to his bones. Bourdain wrote:

“I have an operating principle that I am perfectly willing, if not eager, to believe that I’m completely wrong about everything. I have a tattoo on my arm, that says, in ancient Greek, “I am certain of nothing.” I think that’s a good operating principle. I love showing up to a place thinking it’s going to be one way and having all sorts of stupid preconceptions or prejudices, and then in even a painful and embarrassing way, being proved wrong. I like that. If you can get a little smarter about the world every day, it’s a win. I just came back from Iran, and perfect example: I went in thinking all sorts of things, and man I had every expectation, everything I thought I knew or suspected, turned up-side-down.”

He saw the way, he even walked the way, and there’s some deep truth in how that’s enough. Whether that deep truth sunk into his bones and marrow, I am in no position to say.

Did he fail in the great quest? Of course. We all do. We all fail. It’s part of the great mystery. It is also, often, the place we find the connections.

And. Do we need a bit more than a simple pointing to not knowing? I believe the answer to that is an unqualified yes. For one thing we need to address the questions of mental health. Depression & other mental illnesses are a real thing. And there’s more. A moral container is important. I’ve seen from the lack of it in my life and in the lives of others how that container is critically important. And there are spiritual disciplines that can be very helpful. I think Bourdain’s table fellowship a genuine spiritual practice. But there are other things that can be helpful, as well. Real, actual Zen is especially good in this regard. (Please forgive the shameless pointer…)

Also, what exactly this uncertainty might be has been mapped. Knowing about that not knowing can be critical.

That said, Anthony Bourdain has pointed us in right directions.

It’s all in that tattoo.

I am certain of nothing.

Part of the wonderment for me is how Anthony Bourdain took this secret to the mystery of the cosmos and presented it in a cooking and travel television show. However imperfectly, he presented the great way.

And it is the great way. Follow this all the way down. And, well, you will enter a world beyond self and other. You will find the meaning and purpose of life.

Thank you, Anthony, for the pointer.

Fondest wishes on your journey…

June 10, 2018
Somewhere Over the Rainbow: The Smallest of Zen Reflection on the Original Koan
Next Post

June 14, 2018 The Zen of Yasunarti Kawabata
Recent Comments
0 | Leave a Comment
Browse Our Archives
get the latest from
Monkey Mind
Sign up for our newsletter
POPULAR AT PATHEOS Buddhist
1