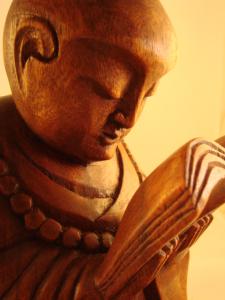 On one of those Zen pages on Facebook, in this case one focused on the Soto school someone asked for a pointer to an introductory book.

People offered their views. Some even seemed helpful.

And it set me to thinking about what books might be helpful for someone seeking a small library of useful titles for a beginning student of Zen of the Soto flavor, or at least leaning in that direction.

I found I came up with eighteen books. A small but for anyone at all serious accessible library.

For Buddhist fundamentals I recommend Karen Armstrong’s Buddha and Walopla Rahula’s What the Buddha Taught. The first is an accessible read and the second, while controversial in some circles for modernist inclinations is clean and straightforward.

For a sense our spirituality as a living thing I recommend reading the Platform Sutra of the Sixth Ancestor, which lays our our mythic place as well as the fracture lines of our tradition. Red Pine’s version is particularly accessible.

And while speaking of context, from a more academic perspective rather than a practitioners view John McRae’s Seeing Through Zen is probably essential reading for anyone hoping to situated the Zen schools within Buddhist and East Asian thought.

Me, I’m mostly interested in a practice oriented perspective.And, in my view, the best of the brief overviews of Zen writ large is Martine Batchelor’s Principles of Zen. Out of print but available used through Amazon or Abe Books.

Robert Aitken’s Taking the Path of Zen represents the Sanbo Zen style which rests on a Soto fountain but introduces koan introspection as well as an emphasis on lay practice.

Similarly Philip Kapleau’s Three Pillars of Zen is very important but of a complicated parentage. Its strong emphasis on koan introspection and awakening has proven controversial, especially among some Soto practitioners.

I have a soft spot in my heart for Maezumi & Glassman’s On Zen Practice. A simple and elegant overview.

Shunryu Suzuki’s Zen Mind, Beginner’s Mind is not an introduction but once one has began the practice it should prove useful.

There are several important anthologies of writings on Zen meditation. A a particularly good one for the Soto style is John Daido Loori’s Art of Just Sitting. It has companion volumes, Sitting With Koans also edited by the roshi and The Book of Mu, edited by Melissa Myozen Blacker and myself.

I strongly recommend reading into the precepts as well. Again no one book is the best, but within a Soto context I think maybe Reb Anderson’s Being Upright is a good read.

I would also advise a simple anthology of Eihei Dogen, perhaps Moon in a Dewdrop. A pretty good secondary source for reading Dogen might be Hee-Jin Kim’s Eihei Dogen: Mystical Realist.

Hardly a complete list, but you read these and you will have a pretty good foundation of Zen Buddhism.

July 14, 2018 Two Cheers for Democracy: A Small Reflection on Bastille Day
Recent Comments
0 | Leave a Comment
Browse Our Archives
get the latest from
Monkey Mind
Sign up for our newsletter
POPULAR AT PATHEOS Buddhist
1