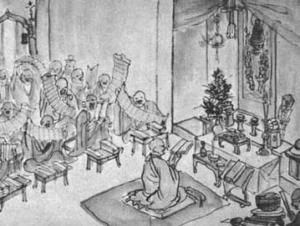 It was on this day, the 17th of August, in 1549, that the Battle of Sampford Courtenay concluded the Prayer Book Rebellion in England.

Between this oddity of ecclesiastical history and my friend the music theorist Stephen Slottow’s current researching of Zen liturgies in the United States I find myself thinking  a fair bit about the place of liturgy in the spiritual life and more specifically liturgy within our emerging Western Soto Zen Buddhist sanghas.

We definitely are not turning to arms for and against liturgical reform within our Zen communities. And, in fact, I think relatively few among us give much thought at all to questions of Zen liturgy. There are several reasons for this.

Zen came West pretty much packaged as two things. One is a pointing to an ecstatic transformative experience called enlightenment or awakening. And the other as meditation, actually two intertwined meditation disciplines, shikantaza and koan introspection.

In times past one could speak, if cynically, of liturgy as being the “work” of the clergy. This entailed the creation of merit through liturgy and then the “transferring” of that merit through dedications. And this has been the principal source of income for Buddhist clergy, including the long history of Zen priests within the Japanese inheritance.

In the West this creation and transference of merit stank of the same noxious perfume as selling indulgences, which kicked off the Christian Reformation. And, of course, magic. A signal part, probably a majority of those interested in Zen have an allergy to magic. And so liturgy just wasn’t interesting to the majority of those first turning to Zen.

As often turns out to be the case, the dismissal was too early and based on insufficient information. As with the precepts and the moral/ethical container at the heart of  the Zen tradition, liturgy turns out to be incredibly important. In fact Zen liturgy has also been an integral part of authentic Zen practice, well, basically, since its beginnings.

Liturgy means “public service,” or “the work of the people.” Within a Zen context the late John Daido Loori Roshi observed, “Liturgy makes visible the invisible, bringing into awareness the shared experience of a group. In theistic religions, liturgy reaffirms our relationship with God. Zen, by contrast, is nontheistic, so its emphasis is on realizing our Buddha nature, or the nature of the self. All of Zen’s rituals point to the intimacy between the self and the ten thousand things.”

Making the invisible visible in Zen means bringing our whole lives together. Liturgy is a symbolic expression of that fullness, which, like zazen, opens us to a way of being in the world. So, even if we in the West are no longer supported through that work of creating and transferring merit, liturgy remains important.

Although in what ways precisely this might be done is quite open. Here we see Western Soto open to wild exploration, ranging from the barest skeletal forms to full on liturgical life as an integral part of the Zen project.

These days my own Blue Cliff Zen community is attempting to adapt the more traditional forms of the traditional liturgy, abbreviated but not stripped of the larger arc, and wherever appropriate in the vernacular. I suspect this is part of a small trend among many established but autonomous Zen communities that claim Soto roots.

Critically, we now have the basic liturgies of the Soto Zen school in serviceable if not singing English translations. The Standard Observances of the Soto Zen School is available through the Sotoshu, while the abridged Soto School Scriptures for Daily Service and Practice is available as downloadable files at several locations around the inter webs. I consider these documents critical for us as we go forward.

What we will do with all this? Well, who knows?

But these certainly are interesting times…

August 18, 2018 Dave O'Neal's Poem Review of Introduction to Zen Koans
Recent Comments
0 | Leave a Comment
"long live Theo-poetics! and universalism! and so on and so forth!"
Roger Butts That New Universalism: A Smallest Meditation ..."
"Thank you, James. You explained prayer to me as a way even I could accept. ..."
Ohyetwetrust A Meditation on What My Grandmother ..."
"This reminds me of the story about a priest holding a candle doing a one ..."
Catherine A Meditation on What My Grandmother ..."
"Fun talk. Here's my translation of the case:Raised: Guishan asked Yangshan, “Suddenly there is a ..."
Gregory Wonderwheel Book of Equanimity Case 37
Browse Our Archives
get the latest from
Monkey Mind
Sign up for our newsletter
POPULAR AT PATHEOS Buddhist
1