On Finding a (Zen) Teacher 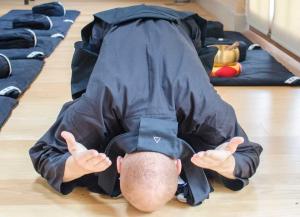 Today I received a note from a Facebook friend. Someone I like and who seems thoughtful, certainly is in his postings. He mentioned he was coming to the end of my most recent book and found himself tangled in the question about needing a Zen teacher. He asked my advice.

I felt this something worth exploring publicly. I believe it might be useful for a number of people. I’ve written on the subject of Zen teachers several times. The Soto Zen Buddhist Association actually posts one of my earlier thoughts on the subject at their website. Largely I continue to think the advice there at the SZBA site is helpful.

There I recommend starting by reading about Buddhism & Zen. Know what you’re getting into. I consider this foundational. It should co-arise with trying an actual Zen practice. Frankly without out these, both of them, all that follows is meaningless…

That said, I think finding a group to sit with is essential. Actually, on a recent Facebook posting I suggested finding a right group is more important than finding a teacher. Got some pushback on that one. Most of it, I noticed, from teachers. But, beyond the snark of that observation, they’re actually right, the group isn’t enough. It is profoundly important, but not enough. Maybe this is another co-arising. I will discuss that as we go forward.

With some reading, a practice, and in my view with a practice group, now a teacher becomes critical.

Those of us who are boomers or Gen X have issues around authority, and therefore with teachers. Fortunately for Millennials, this seems less a problem for them. Although I’m not exactly sure. It is worth looking at our own hearts and exploring what makes us either want a guide or makes us resistant to having one. Both provide pointers for understanding our own hearts.

But, here’s the deal. On the Zen way one needs a guide, and one with a human body. The likelihood we’re going to make our way successfully on our own is pretty low. People do it. But, I would put money down that it isn’t going to be you.

A teacher is someone who has walked the way longer than you, has experienced a number of the traps and snares and successfully traversed the great way to a healing of his own heart and along that way acquired some skills that might be helpful for you on yours. She is not a guru. He is not a perfect master. Part of the joy of the Zen way, we’re all bozos on this bus – together. But, she does know the way and can guide, can coach.

The problem is how to sort wheat from chaff. And, please do note, there is a lot of chaff among the wheat.

When I first started practicing Zen in the late nineteen sixties, Zen teachers were pretty hard to come by. Most were Japanese and all had pretty straight forward credentials. Of course it turned out that wasn’t enough. And, we who embraced the Zen way in the West began a journey of discovery about what a Zen teacher might be.

And then the floodgates opened. And. It was a mess. On one hand there were those who felt a need to dispel our illusions about Zen teachers as perfect masters. Considering some of the traditional rhetoric, I think this was necessary. Among these writers, Stuart Lachs authored several important cautions, like this one.

On another hand a small cottage industry emerged of people who decided they were Zen masters without the dealing with the difficulty of having an actual Zen master authorize them as one. (I deleted a link describing one of this tribe. All you have to do is look and see who they say authorized them. No legitimate Zen teacher ignores this critical question.)

And then there were the various mostly sex scandals.

This led to a time of vulnerability and the rise of systems of accountability. Today there are associations of Zen teachers, such as this and this and this. All are concerned with at least minimum credentials and codes of ethics.

With this the made up teachers have mostly disappeared. However. What we have now is a large and growing crowd of people. They have at least in a technical sense formal authorization as Zen teachers. But. Did I mention wheat and chaff?

The various associations tend to take some kind of formal and publicly acknowledged authorizations as the base line. And, I do think those are critical. Necessary. But, here’s a problem, “dharma transmission,” that formal authorization, just is not sufficient.

Here’s the deal. Authentic masters of the way are as rare as hen’s teeth. And institutional credentials begin to fail at this level. If you want to hold out for a true master, well, good luck.You are generally better off looking for a competent teacher, someone who has traveled further than you, seen a bit deeper, and seems to have some skill as a guide.

All this said as background we come to what I feel are the necessary qualifications for a Zen teacher. (And please note a Zen teacher as in spiritual director. My experience is that there are legitimate Zen priests who train in Japan and in Japanese inspired monastic/priestly programs who are prepared to be Zen priests – leaders of liturgical practice. Some are also spiritual directors but many are not…)

So, you’re looking for a Zen teacher? You want someone who is experienced, who has walked the Zen way for a long time, and might be a suitable guide for you?

Here’s what to look for:

Assuming you’ve already begun sitting, have done some reading both online and in books, and have tried to find a community of practice. These are pretty foundational things. Especially the beginning to sit and doing some reading.

Number one, are they actual serious Zen students? How long have they been practicing. Where? And with whom?

Number two, who authorized them? Is this a lineage of serious and sustained practice? Are there questions about the lineage or the teacher’s teacher? Not deal killers, but important to know.

Number three, what about the community within which they practice? You can learn a great deal, maybe all you need to know to make a decision about whether this is a right person for you. A right person not the right person. The whole thing is a mysterious combination of qualifications and chemistry.

Number four, try it on. Sit with this person. Attend retreats they lead. Take your time. See where you heart leads you.

Number five, then, and only then, bow. Offer the person a box of incense. Take them on as your spiritual director. Not as the owner of you life, but as someone who has walked a spiritual path and can coach you on your own walk.

They need to be walking the way, as well. If they’ve stopped learning, be suspicious. If they ask you to do something illegal or immoral, well, you’re a grown person; make an appropriate response We’re long past the era of this teacher or no teacher. Own your own part in the practice.

Do this and, well, okay, no guarantees. But, you will be well on the way. The great way.

August 1, 2018
The Buddha on Friendship & the Spiritual Life
Next Post