David Loy, Nonduality, Zen, and the Mystery of our Lives 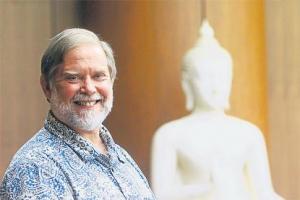 I’ve just learned that David Loy’s monumental study Nonduality will be released in a second edition next year. It’ll be issued by Wisdom Publications, which devotes its entire list to the propagation of Buddhist insight in the English language.

I’m very excited. His Nonduality has been very important to me as I’ve tried to understand the way of the wise heart that I entered into some fifty years ago. Like most people who stumble into a spiritual path, it is a stumble. We seem to find our spiritual paths more by way of bait and switch than through any actual rational decision making process.

So, for me, I though I was looking for something grounding to my life. Well, I found it. But, as they say “Zen is not what you think.” And indeed very little I thought about Zen and spirituality at the beginning continues to inform my walking this path.

At some point we do need to sort things out. As the Zen teacher Dainin Katagiri points out at some point you “have to say something.” And David Loy provides those necessary words in his book Nonduality. I consider David Loy one of my principal teachers, and a trustworthy guide for all of us seeking a heartful wisdom in this world of hurt and longing. And this book is one of the reasons why.

The heart of the authentic path as I understand it turns on that word “nondual.” Of course, like most important words nonduality has a multitude of definitions. I find “Nondual” points to a place where our ordinary experience of a divided world is challenged by an assertion of some grand reconciliation. All nondual teachings are based in an experience, where actually even a word like “experience” is challenged. It is something like a black hole, where we just can’t see it straight on. But, there’s so much around it that we can discern what we need to.

I’ve found David Loy uniquely placed to do explore what that word nonduality means for spiritual seekers. On the one hand he is an academic. Actually the origins of the book trace back to his doctoral dissertation. And if I have any criticism of the book is that the traces of that original thesis survive in less lyrical language than we find in his more recent writings. But, he is also a Zen teacher, a dharma successor to the renowned Japanese lay master of the koan way Koun Yamada. So, he brings a near unique set of skills and experiences to the conversation.

Loy sets the stage by citing Plotinus’s Sixth Ennead, “There were not two; beholder was one with beheld; it was not a vision compassed but a unity apprehended.” His assertion is that this nonduality is a thread running through religion and philosophy seeing in the West, seen in the writings of Pythagoras, Heraclitus, Meister Eckhart, Jakob Boehme, William Blake, Baruch Spinoza, Georg Hegel, Fredrich Nietzsche, and Alfred Whitehead. To simply begin a list.

But it is in the East that the promise of nondual wisdom is most deeply plumbed, especially within Vedantic Hinduism, Buddhism, and Daoism. And this study is rooted in comparing nondual wisdom within those traditions, and while he doesn’t explicitly say so, comparing it to his own experiences on the Zen path. While most studies of the various traditions emphasize their numerous differences, Loy, while sympathetic to the necessity of seeing those differences, in this study was more interested in their similarities.

One thing I particularly appreciate about this book is that while it is “theoretical,” it never forgets the primacy of the nondual encounter itself. And as Loy explores the words we have to approach it, he is always inviting us into our own intimate encounter.

In this study he sought the commonalities, a “core doctrine” that informs all these different traditions that advocate a nondual reality. And he found something. Riffing off the Buddhist Philosopher Asanga, Loy suggests the nondual is predicated upon three things. “First, there is the direct intuition of reality (nonduality) by those who have awakened to it; second, the report that Buddhas (or other enlightened people) give of their experience in speech or writing; and third, the experience (of nonduality) that occurs in deep meditative samadhi, when ‘the concentrated see things as they really are.’”

Loy’s book has two broad sections. The first explores Buddhism, Vedanta, and Daoism, and attempts to extract that “core doctrine.” As I said, I believe he succeeds. Or, succeeds as well as anyone can with this elusive thing that is our beginning and end, that is neither exactly a thing, nor precisely not. Loy speaks of the sense of nonduality that emerges from this examination a “nonduality of duality and nonduality.” Which I find the universal solvent.

At the heart of all this is his “core doctrine.” Loy identifies three characteristics shared by Vedanta, Buddhism, and Daoism in their approach to nonduality.”(T)hinking that does not employ dualistic concepts, the nonplurality of phenomena ‘in’ the world, and the nondifference of subject and object.” These observations include a call to free ourselves from the constraints of dualistic thinking, and, critically, the promise that we can.

He does not explore the possible mechanisms that allow this. Which is fine, that’s someone else’s project. But he does explore what it looks like as it emerges within the mystical traditions of the East, coupled with enough references to Western insights to be useful for those who would apply it to the Abrahamic religions.

Loy’s core doctrine challenges any sense that there is an escape from the world to some realm somewhere else. With that it rejects assertions we need to turn from the world in our spiritual quest. And third it doesn’t reject dualistic thinking, such as reasoning, but rather transforms it. These three things, while they close some possible doors, it opens ones that I think are the most fruitful.

Actually, my breath was taken away as I read his description. He spoke what my heart has seen as a this-worldly spirituality, one that does not deny the evidences of our senses, but corrects the errors of our causal cognitive dualism. For me his pointing is near the heart of the Zen experience, the fruit of that path of first encountering the nondual in its most gross sense as the obliteration of our sense of separation. But, and this is critical, not resting there.

From that encounter the journey gets dangerous. Because the closer our words approach accurately describing the fundamental matter, the easier it becomes for us to think they are the last word. And with that what was so alive quickly become dead words. But, if we take them as dynamic and pointing, a very good inference of the black hole that swallows all words, then things happen. And, Loy never lets it rest. He is nimble, and creative, and curious.

So, in the second part. Here he takes that “core doctrine” he has discerned, and reexamines the source traditions and their differences. This is in some ways where the rubber hits the road. By attempting to examine the major nondual traditions through this “higher’ perspective he provides a critique of each of these traditions that no doubt invite pushback from partisans of individual schools. And, I think those who stand more exclusively within those traditions in those very pushbacks also help any of us who see this as more than an intellectual exercise, but rather the very substance of our hearts, push us ever deeper.

I’ve long been interested in whether there is a “naturalistic perennialism” that is some current at the heart of the religious impulse that is common to our humanity. If there is such a thing, I believe it is going to be found within the mystical traditions of the world’s faiths. And, in Nonduality, I believe David Loy successfully sorts wheat and chaff and describes the truth at the heart of the different traditions.

What is particularly interesting for me in his book is how it provides a theoretical structure for a contemporary, perhaps even a modernist Zen Buddhism. In his quest for the universal underpinning of the core teaching of the mystical traditions, Loy ends up offering what I find to be a foundational document for our new world Zen. That is a Zen respectful of the received tradition, but also a Zen critically examined in the light of the many ways that nondual insight is encountered.

Actually, I think people who stand in other traditions such as Judaism, Christianity, and Islam can equally profit from David Loy’s Nonduality, offering pointers on how to critically engage their own mystical traditions through the lends of his core doctrine.

He explores what that might look like at greater depth in later books, particularly A New Buddhist Path. But the questions to address are pretty much all laid out here. Whatever its value for other traditions, David Loy’s Nonduality is a foundational study for Zen in the West. It helps us to understand what lays behind our practices of Zen meditation, both shikantaza, the way of practice/enlightenment, and koan introspection, the use of stories to open our hearts into the intimacy of our lives. If we want to see what we are about there isn’t much better way of doing it than here.

So, I’m very excited that there will be a second edition.

When it comes out next year, I hope you buy it. More. I hope you read it. I will…

November 25, 2018
Entering Into Silence: A Zen Koan
Next Post

November 29, 2018 Mind Bubble on Christian Universalism, Together With a Passing Reference to a Beloved Zen Buddhist Text
Recent Comments
0 | Leave a Comment
Browse Our Archives
Related posts from Monkey Mind