Turning Toward the Wound: a Zen Buddhist Advent Meditation 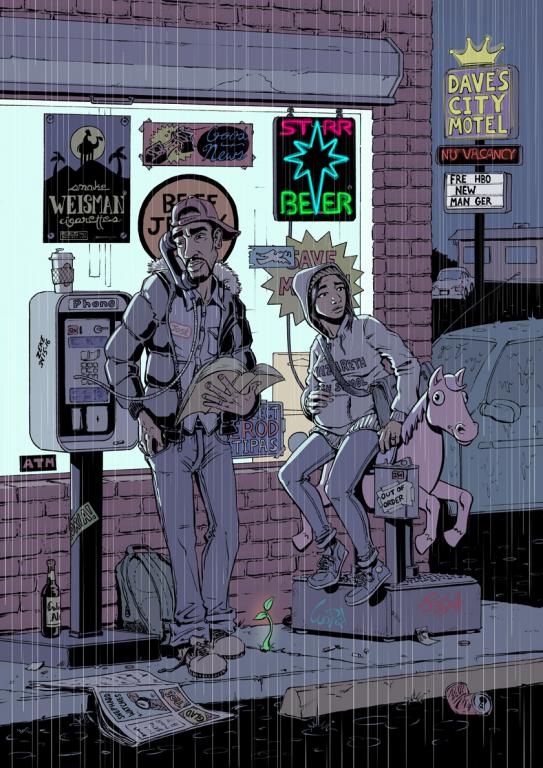 Of the various stories of the Christian tradition I am profoundly taken by the Christmas story in its various parts.

And, of those contemporary images of Mary & Joseph on their way to that manger, this one by Everett Pattersen, with it many layers is my favorite.

Of course in this time of desperate people seeking refuge those images of the holy family fleeing are also terribly moving. I close my eyes and I see those images, both ancient and oh so modern.

But in the cycles of the Christian church that’s something yet to come. We’re still in Advent. Joseph and Mary, heavy with the child yet to be born are on their way to David’s city.

Here we have the poor on another road, this one while not that full on flight from horror are still dictated by circumstances well beyond their control. And where few care about the burden of this forced journey.

While their lives are not in any obvious immediate danger, they are subject to all the indignities inflicted upon the poor.

In my Buddhist circles there is a considerable and often heated conversation about the place of activism, actually, any concern with social ills. Similar arguments are made among my Christian friends. The poor, as Jesus himself would be said to say, will always be with us. And. The pain of dukkha is relived by disconnecting from the illusion of control, or at least many of the wise say so, so, why grasp after something as illusive as “justice?” Isn’t it just more of the same old, same old?

It can be. Often it is. In my life I’ve seen how some of the most bent and wounded people are social justice activists. I certainly know a couple of the most violent people I’ve met were peace activists. It can work that way. It often does.

And. There is no escape from this world. The stories that take us to some other place through “salvation” or “awakening” are either metaphors for something that happens here and now, or, are just more sweet lies. There are a lot of lies on the spiritual path – just like with the rest of our lives.

But, here’s a truth I’ve found: Awakening, salvation, healing, are only found here. Heaven, nirvana, the Pure Land: They are here or they are no where. Of course that “here” is somewhat mysterious, including as it does all three worlds of past and future as well as the present. But that great healing at the heart of the world’s religions many promises only happens when we see ourselves here within in the fullness of it all. And this very much including within the broken and downtrodden. Maybe, actually only fully when we see ourselves among the wounded, the forgotten, the abandoned.

Our teacher Leonard was right, the cracks are where the light shines through.

We only heal as we turn toward the wound.

But when we do…

Hope will be born…

December 25, 2018 A Zen Priest Goes to Midnight Mass
Recent Comments
0 | Leave a Comment
"An excellent essay, and a necessary one. I quibble about the UU T-shirt which says, ..."
Ohyetwetrust CHANGE & NOT KNOWING: Darwin, Huxley, ..."
"I appreciate your acknowledgement that since you didn't know the source of most of the ..."
Harold Wood Recalling John Muir, Nature Mystic, and ..."
"I purchased "This is It" back in 1974 simply because of the paperback cover. Now ..."
Ed Alan Watts Turns One Hundred & ..."
"One basic error of every "optimistic" philosophy is thinking that humans are evolving into more ..."
bill wald ALL BEINGS, ONE BODY: A TRUE ..."
Browse Our Archives
Follow Us!