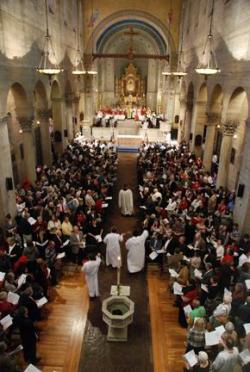 Last night Jan & I decided to go to mass at St John’s the Episcopal cathedral for Los Angeles. Okay, I wanted to go, and Jan was happy enough to indulge me.

As most who know me know, I am a Zen Buddhist and I am a Unitarian Universalist. Two things that might incline one that’s enough for one plate. But, life is messy. I believe the basic analysis of Zen Buddhism as the closest to reality of those offered by the various religions. And. My personal disposition is humanist, rationalist, and naturalist. And. My natal tradition (a term I first heard used by one of my teachers, Joanna Macy) is Christianity. My dreams are populated by Jesus and Mary and Mary. I did, after all, learn to read from a large illustrated King James version of the Bible resting on my grandmother’s lap.

Of course Unitarian Universalism is firmly rooted in a humanist interpretation of the Christian story. So, there’s that. And, in my ministry, especially my last two pulpits in historic New England, Christmas was a thing. There is little as majestic as the Christmas evening service of lessons and carols with a judicious blending of the story from Luke and a touch of Matthew, clearly Unitarian texts, and traditional straight ahead and unapologetic Christmas carols and hymns. Not a lot of that at the UU churches in my neighborhood, as much as I love them for other things.

It was everything we hoped for. The cathedral is on the small side for a cathedral, but the relative intimacy only enhanced the experience. For a good half hour before the beginning of the mass we were treated to a selection starting with Vaughan Williams. And then a poem by the seventeenth century Anglican poet & mystic George Herbert set to music by Christopher Gravis.

The shepherds sing; and shall I silent be?
My God, no hymn for thee?
My soul’s a shepherd too: a flock it feeds
Of thoughts, and words, and deeds.
The pasture is thy word; the streams, thy grace
Enriching all the place.
Shepherd and flock shall sing, and all my powers
Out-sing the day-light hours.
Then we will chide the Sunne for letting night
Take up his place and right:
We sing one common Lord; wherefore he should
Himself the candle hold.
I will go searching, till I find a sunne
Shall stay, till we have done;
A willing shiner, that shall shine as gladly,
As frost-nips Sunnis look sadly.
Then we will sing, and shine all our own day,
And one another pay:
His beams shall cheer my breast, and both so twine,
Till even his beams sing, and my music shine.

And then some more Vaughan Williams before launching into one of the more beautiful Christmas Eve masses I’ve ever attended. So lovely. So beautiful.

Then midway one of the co-deans of the cathedral, the Very Reverend Dr Mark Kowalewski gave us the sermon. He chose to reflect on the Christmas Truce of 1915. Something in my parish days I returned to on a number of occasions myself. The sermon was past lovely, he used the device of pausing in his already lyrical prose to let a soloist recall us to the mystery by singing at appropriate moments.

And, I found my mind floating back to that story of the Christmas Truce.

The Great War as our grandparents or great grandparents called it was like too many wars, where from any distance at all it is hard to understand what justified the terror and carnage. It was a terrible thing. What we know with certainty is that Europe was divided in a conflict and was awash in blood. Soldiers were in trenches that fronted on each other, and hundreds and more would die to take inches of ground. Over, and over again. Think hell on earth.

Then six months into the conflict there was that Christmas Eve. Into the cold and mud and fear and across the gulf of trenches and guns a young German soldier began singing Silent Night.Then, magically, the British responded in kind.

That was the miracle. The first part. Then, a young German soldier advanced under a white flag, bearing gifts, and right through Christmas day the conflicts stopped.

The generals did not appreciate this, and while there were attempts to claim this peace by the ordinary soldiers again, against the threat of summary execution they failed.

But, people remembered that day. Father Kowalewski preached it. And a hundred years later, I recall that day as if it were my blood memory.

First, I notice that the people we most likely would identify with, the people on whose side our nation would enter that war not long after, did not sing the song first. And. It wasn’t a young British soldier braving being shot carrying a peace flag. The Christmas peace came from the enemy. Peace came from an unexpected quarter. I think about that. It was not unlike hope, peace, joy, coming to us in the birth of a child, an ordinary child. It was very much right for this strange holiday.

That’s a message for all of us, whatever faith we profess or not.

Koan is a Zen term. It refers to something, usually a story, or a bit of poetry, sometimes just a word that stands as a presentation of the whole. It includes with it an invitation for us, you and me, to step into that place. Full. Body. Heart. All of it.

Robert Aitken said more simply a koan is a matter to be made clear. The Christmas Truce is one of those koans, a pointer to something. A place for us to stand. And with it the story behind that story, Christmas itself.

The service came to its end. Something both glorious and a little sad.

Then, Jan and I stepped out a side entrance to avoid the crush at the front doors. As we walked out to the sidewalk I noticed outside sheltered in a corner someone, I couldn’t tell man or woman, was wrapped in a blanket, presumably already asleep. It was past midnight. It didn’t look comfortable, but it did look safe. Relatively safe.

I think of the beauty of the service and the congregation, a wonderful mix of younger and older, of many classes, and many colors. I think of the warmth of their welcome to all us strangers and sojourners.

And I think of that person wrapped in a blanket barely sheltered from the cold and wet.

And everything tumbles away. All my ideas of right and wrong true and false. It burns.

I hate the hate of the world and maybe even more its indifference. And I’m glad for the care of some. Even when it doesn’t fulfill the promise of those stories.

And it burns away.

And. And. In the empty, out of the empty, something births. Like a child of the poor with no hope and no promise for anything better. Except a dream of angels hanging in a mother’s heart.

Howard Thurman sings to us of this work of Christmas, of the ordinary miracles that make it all true.

When the song of the angels is stilled,
When the star in the sky is gone,
When the kings and the princes are home,
When the shepherds are back with their flocks,
The work of Christmas begins:
To find the lost,
To heal the broken,
To feed the hungry,
To release the prisoner,
To rebuild the nations,
To bring peace among brothers,
To make music in the heart.

A sorrow. And a joy. An invitation. And a koan.

December 22, 2018
Turning Toward the Wound: a Zen Buddhist Advent Meditation
Next Post

December 26, 2018 Boxes: A Small Meditation
Recent Comments
0 | Leave a Comment
"long live Theo-poetics! and universalism! and so on and so forth!"
Roger Butts That New Universalism: A Smallest Meditation ..."
"Thank you, James. You explained prayer to me as a way even I could accept. ..."
Ohyetwetrust A Meditation on What My Grandmother ..."
"This reminds me of the story about a priest holding a candle doing a one ..."
Catherine A Meditation on What My Grandmother ..."
"Fun talk. Here's my translation of the case:Raised: Guishan asked Yangshan, “Suddenly there is a ..."
Gregory Wonderwheel Book of Equanimity Case 37
Browse Our Archives
get the latest from
Monkey Mind
Sign up for our newsletter
POPULAR AT PATHEOS Buddhist
1