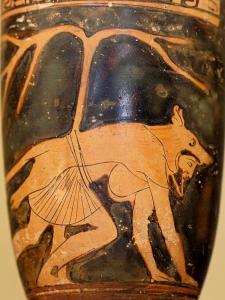 I find myself thinking a lot about us as human beings. In the great swirl of things, looking at how we exist in this world, and what evils we are capable of, it is hard to see us as basically good. But, also I don’t see we’re unrelentingly evil. Clearly we have two propensities, both on full display to anyone who cares to look around. Maybe to anyone willing to look within.

This brings to mind that popular parable sometimes called the “Two Wolves.” Mostly it is attributed to Native American wisdom. It is often cited specifically as a Cherokee story. I’ve even found it quoted on a Native American website reporting that Cherokee origin. In fact its one of those modern stories that float around and capture the heart, like the “Starfish story,” but which have uncertain pedigrees. In fact the earliest version I can find reported for its origins is from the late Baptist evangelist, Billy Graham.

Because of this ambiguity in attribution I’ve also seen articles and whatnot that dismiss the parable, one article, for instance, calling it “phony.” Because of the Native American attribution some go deep into the weeds about the various ills of cultural appropriation. Genuine issues, worth looking at. But. People have been attributing works to others since just about forever. In biblical scholarship there’s even a term for it: pseudepigrapha. .It happened throughout antiquity. And, it still happens.

The important thing here is the story itself. It points to things. And asks a real question. My very short version.

We have two wolves that live at war within us. One is good. One is evil. The one we feed is the one that wins.

Longer versions are better, we like side dishes with our meat and potatoes.

But the main course is in front of us.

Good. Evil. Big words. We often like to embrace the one and recoil at the other. But the terms keep returning. I think its because they point to inclinations of the human heart. The one is seeing that we are intimates, each of us with the other. In our actions this births as our quest for fairness. And, there’s that other part as ancient as our humanity, probably more ancient. We need to survive. And sometimes that leads to doing things that violate our sense of fairness. Sometimes it leads to us doing very very bad things.

So, we have urges within us to harmony and fairness and to winning, sometimes at any cost. Two wolves. Which one do we feed?

Okay. And then there’s the next thought. Can it all be reduced to a war within us? An unfortunate image, but given our human history not totally without merit. But is that it? This struggle and winning or losing? Are we caught in some great Manichaean universe with good and evil eternally at war?

In another context, maybe ultimately not all that different Abraham Lincoln asserted “We are not enemies, but friends. We must not be enemies. Though passion may have strained, it must not break our bonds of affection. The mystic chords of memory will swell when again touched, as surely they will be, by the better angels of our nature.”

And within it all, choices.

We choose. For ourselves, for our world.

May we choose wisely…

April 15, 2019
Knowing is not the way: A Small Reflection on a Zen koan
Next Post

April 18, 2019 A Zen Priest's Argument With the Argument from Design
Recent Comments
0 | Leave a Comment
"I have to chuckle, just past the four Bodhisattva Vows I ran into an offering ..."
Kyllein MacKellerann " The Four Bodhisattva Vows
"In a way, it's frustrating—all that data and nobody knows a Da*n thing. Seriously, things ..."
Kyllein MacKellerann " My Quest for Unbiased News: Or, ..."
"The first river of the Bible is Pison: " The name of the first is ..."
Herrnhut Prophecies of the End: Dreams of ..."
"My primary consciousness on Zen is that unlike religion or philosophy which depend on linear ..."
Frank Redden Recalling the Archangel Raphael & Happy ..."
Browse Our Archives
get the latest updates from
Monkey Mind
and the Patheos
Buddhist
Channel
POPULAR AT PATHEOS Buddhist
1