Dreaming a Cookbook & a Pie: A Traditional Zen Story Retold 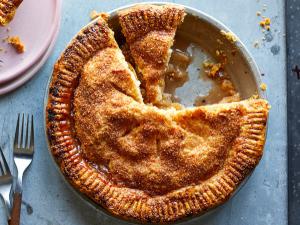 Dreaming a Cookbook & a Pie

Once upon a time long ago and far away there was a follower of the intimate way named Mountain View.

He had studied with many teachers until he found the one with whom he could dream. After dreaming together for a time, Mountain View was sent to wander a little and meet and learn more of the three worlds.

After a particularly long walk into the wilderness, he settled for the night, and using a stone for a pillow he fell into a deep sleep. It was dreamless for a time.

At some moment Mountain View realized he had been transported to the heavenly realms. There he met with the Teacher to Come. They spoke of this and that, how the weather was affecting the crops where Mountain View’s people lived, the beauty of that mountain he’d been named for, and how they both loved the shores of the ancient ocean. Then the Teacher to Come invited Mountain View to sit with the community for its evening meditation period.

He was taken by the head monastic to the third seat. Mountain View tried to demure, too honored a place. But she insisted. So, he sat and, actually they all sat, and before the final bell struck, they were all enveloped in the great silence.

Then as the bell sounded ending the period of meditation the head monastic stood and announced in her clear voice, “the visitor in the third seat will now give the evening’s teaching.”

Instantly, Mountain View, stood, walked over to the gong stand, took a stick, and struck it.

He paused. The silence of the world. A breath. Nothing more.

And he continued, “True though they may be, our intimate way is as far from these things as cookbook and a pie.”

He paused. The silence of the world. A breath. Nothing more.

And he said into the silence, “Listen. Listen.”

June 10, 2019 The Abbess Tumbles Down a Hill: A Christian Story Retold by a Zen Priest
Recent Comments
0 | Leave a Comment
"Experiencing the way you bring things together is a joy. As I read, my eyebrows ..."
C Omorochoe Walking the Talk: A Small Reflection ..."
"ditto"
Paul Nagy Walking the Talk: A Small Reflection ..."
"Beautiful Mind. I enjoy the copious simplicity and reach.... Thanks."
Paul Nagy DREAMS OF WALDEN POND: The Way ..."
"Fun talk, I hope your UU folks were not too disoriented not being able to ..."
Gregory Wonderwheel A Zen Priest Thinks about the ..."
Browse Our Archives
get the latest from
Monkey Mind
Sign up for our newsletter
POPULAR AT PATHEOS Buddhist
1

A Brief Pause to Recall Nestorius, Late Patriarch...
According to the good folk at Wikipedia,...
view all Buddhist blogs
What Are Your Thoughts?leave a comment
Copyright 2008-2020, Patheos. All rights reserved.