The Americanization of Zen Chanting: A Review

The Americanization of Zen Chanting: A Review June 6, 2019 James Ford 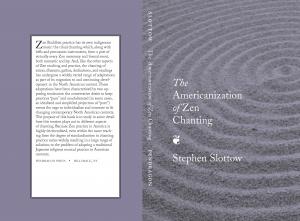 The Americanization of Zen Chanting

A review by James Ishmael Ford

Stephen Slottow is currently associate professor of music theory at the College of Music at the University of North Texas. His doctorate was earned at the City University of New York. In the darker recesses of his past he has also been a professional “fiddler and banjo player.”

Professor Slottow has also been a student of Zen for close to five decades, studying first with Philip Kapleau and several of his dharma heirs, then with Robert Aitken’s dharma successor Patrick Hawk, ending only with Hawk Roshi’s death. He and I’ve now been working together exploring the intricacies of koan introspection for the past several years.

So, I know the author and count him as a friend. Fair warning.

But I also have a sense of why he is such a perfect person to write this book. Professor Slottow brings these two passions to this project, music and Zen together into the research and writing of The Americanization of Zen Chanting. He does it with skill and grace.

I read it, actually I devoured it in a single sitting. At 168 pages, including index, it is a slender volume. But it is packed with information simply unavailable from any other source. I felt nourished, and as a passionate advocate and participant in the project of rooting Zen Buddhism here in the West, inspired.

Now, a word of caution. Actually, two. This book would be more accurately, if unfortunately much longer titled, the “Americanization of Japanese-derived Zen Chanting.” While teachers not within Japanese lineages are cited here and there, including Korean, Vietnamese, and Chinese Zen lines, the focus is relentlessly on those Zen communities with roots in Japan and the practices inherited from there.

That and to my mind his unfortunate referencing of the sangha I currently teach with as Blue Cliff, a name we briefly used but changed due to potential confusions with another Blue Cliff Zen community, in favor of the Empty Moon Zen Network. These, frankly, are the only cautions I offer for the potential reader.

This is an incredible book. Let me emphasize. The Americanization of Zen Chanting is a centrally important book for anyone interested in the rooting of the Zen traditions in our Western soil.

Chanting is a core practice of Zen in East Asia. Due to the foundational shift from an emphasis on monastic and priestly practice to lay practice, the centrality of this discipline has attenuated here. In some communities it has even been dispensed with. This book demonstrates why that trend, as contextually reasonable as it is, is a mistake. Reforms are appropriate. Elimination, actually even marginalization of the practices of chanting within our Western Zen communities, would be a tragic loss.

Professor Slottow explores the whys of chanting. He notes the “Zen” of it, quoting the Zen teacher Koun Franz who says, “(T)he purpose of chanting is chanting…” It is a spiritual discipline, meant to be engaged just as seated meditation and koan introspection are. Absolutely. And Franz Sensei quickly notes it is other things, as well.

The professor explores many of those other aspects of chanting, ranging from exploring “patterns of mantric vibration and resonance” held up by the Rinzai priest Meido Moore, who with that emphasizes the values of chanting in the Sino-Japanese normative in Japan, to the vernacular argument of simple exposure to Buddhist teachings. As the professor summarizes, another traditional purpose in chanting is to “connect with tradition, to express gratitude to Buddhas, Bodhisattvas, and ancestors; and express gratitude to the sangha.” Chanting in Zen is a part of a sacred dance of gratitude.

And Professor Slottow doesn’t shy from the elephant in any room discussing chanting in East Asian Buddhism. As the Soto scholar of Zen T. Griffith Foulk writes, merit is “the fruit of good karma (actions), conceived as a kind of spiritual energy that can be saved, invested, spent, or given away like cash.” The accumulation and transfer of merit is central to chanting in its traditional modes. But, it is also, as Robert Aitken called it, “auspicious power.” Something is perceived by many in the actions of Zen’s chanting. And, with that Professor Slottow’s investigation reveals a range of views among American practitioners, ranging from flat out rejection of the assertions of the creation and transfer of merit to whole hearted embrace. And, without a doubt, a full spectrum between.

Professor Slottow continues to examine chanting in Japanese and Japanese derived Zen. He identifies three broad types of Zen chant. The first is Shomyo, which he describes as “elaborate, sophisticated, melodic, melismatic, and rhythmically varied.” The second, Dokkyo or “sutra chanting,” is syllabic, more or less monotonal, and chanted in a fixed rhythm, usually kept by a beat on the mokugyo. And finally there’s a third type that is usually recited.

He devotes a chapter to examining the traditional instruments. He explores chant books. And the professor  compares traditional Japanese chanting forms and their American adaptations and variations.

I was particularly taken with his detailed and sympathetic examination of the chant forms used in communities related to Shasta Abbey, founded by my ordination master Jiyu Kennett. I was a little surprised to find myself describing the first time our sangha rented space from a Shasta Abbey affiliated temple. “I left Kennett Roshi long before the Order was formed and am not intimate with their style or emphasis, beyond being aware they have a unique liturgy adapted from Anglican chant. I’d never heard it before inviting (the monastics at Pine Mountain) to do their Vespers service at our last retreat. I found it both unsettling and hauntingly beautiful.” Professor Slottow then explains both the unsettling and the hauntingly beautiful.

This is an amazing study. Not exhaustive. But it lays out what we need to be looking at. He points to directions that we will be digging into for generations. The professor explores the tradition as received from Japan and lays out major manifestations of the first generation of convert Zen Buddhism.

I think most who care about Zen in the West will have similar experiences.

The Americanization of Zen Chanting is from an academic press and with that a small press run and expensive.

As I write this Amazon says the book is not yet released. This is incorrect. It may be ordered directly from the publisher today.

I hope you will. It’s worth your money.

June 7, 2019 Recalling John Blofeld, Western Buddhist Ancestor
Recent Comments
0 | Leave a Comment
Browse Our Archives
get the latest from
Monkey Mind
Sign up for our newsletter
POPULAR AT PATHEOS Buddhist
1