Mother of Exiles: Recalling the Destruction of a City, and with it, the Birth of a Religion 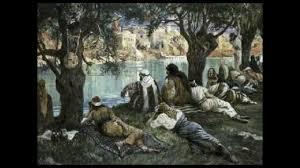 By calculations noted at good old Wikipedia today, the 13the of July, marks the conclusion of the siege of Jerusalem and its sacking by Nebuchadnezzar’s Babylonian army. As the actual year isn’t precisely certain, it could be 597 before our common era or maybe 596, I’m not especially comfortable dating it precisely beyond saying it was the summer of one or the other year.

Jerusalem’s king was forced to watch his sons all be executed before he was blinded. Then he and those with useful skills and intellectuals were then transported to Babylon.

A momentous event for Western civilization. For world culture.

Today the majority of scholars opine that out of the rag tag band of artisans and intellectuals who were carried off to Babylon, a religion was birthed. Remembering and, more, dreaming, they wove together various stories, created a sacred text for themselves, and began something that would survive with many changes over the ages for about 2,600 years. And counting…

We call it Judaism.

And, of course, for us today. It’s hard, certainly hard for me, to think of the lament of all exiles. And their dreams. There is a terrible appendage to the psalm of lament that this exile inspired. And we should never forget our human capacities for ill.

And, and, in that song of longing, what good can birth.

If we are careful.

July 14, 2019 Joseph Priestley, the Priestley Riots, and the Dawn of Modern Liberal Religion
Recent Comments
0 | Leave a Comment
"An excellent essay, and a necessary one. I quibble about the UU T-shirt which says, ..."
Ohyetwetrust CHANGE & NOT KNOWING: Darwin, Huxley, ..."
"I appreciate your acknowledgement that since you didn't know the source of most of the ..."
Harold Wood Recalling John Muir, Nature Mystic, and ..."
"I purchased "This is It" back in 1974 simply because of the paperback cover. Now ..."
Ed Alan Watts Turns One Hundred & ..."
"One basic error of every "optimistic" philosophy is thinking that humans are evolving into more ..."
bill wald ALL BEINGS, ONE BODY: A TRUE ..."
Browse Our Archives
Follow Us!