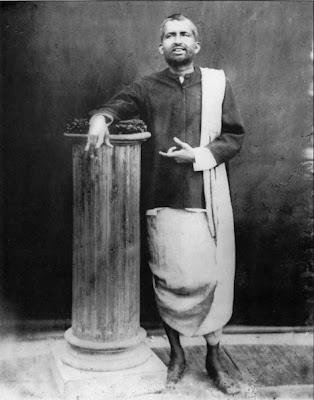 The Hindu saint Ramakrishna was born on this day, the 16th of August, in 1836.

He looms large in my spiritual biography.

My father was a ne’re-do-well, who kept our little family moving from one town to the next, frequently just ahead of the law. And, occasionally, not just ahead.

The sole anchor of our chaotic lives was my maternal grandmother’s fundamentalist Baptist faith, which I clung to as a life-raft in my childhood. But, as I entered my adolescence, a childhood faith, couldn’t sustain me.

Had I moved in more theologically sophisticated circles, who knows what might have happened? But, I didn’t, and in my teens, I jettisoned Christianity as, of course, childish.

I briefly embraced a neo-Ingersollian atheism. (More or less my father’s religion.) But, again, lacking more sophisticated guidance, I quickly recoiled at the lack of heart in a mere Christian rejectionism, and by the time I was sixteen I found myself looking for alternative spiritualities.

Two books opened a way for me. The first was Christopher Isherwood’s Ramakrishna and His Disciples. The second was Simons Roof’s Journeys on the Razor-Edged Path. Roof appears to have been a one-off, after writing his memoir of his time in India together with many anecdotes drawn from Vedanta, he seems to have dropped out of public life. At least I can find little about him through standard google searches.

Christopher Isherwood, of course, was another story. I first learned of him through reading Aldous Huxley. (Lots of Aldous Huxley) And through the two of them I discovered Gearld Heard.

But the ground of it all was the story of Ramakrishna.

Born a poor Brahmin, from his childhood he was concerned with matters spiritual. He was originally a priest of the deity Kali. He was given to long periods of meditation and ecstatic trances in which he was granted visions of the goddess. Perhaps, naturally, his family was deeply concerned. And their solution was to arrange a marriage. A girl named Sarada became his wife, and, to the dismay of the family, his first disciple. Over the next several years he attracted many people including prominent intellectuals. And by the time of his death in 1886, a significant religious movement had grown around him. Thanks particularly to the work of his disciple Swami Vivekananda his message began to travel around the world.

What attracted me, I believe at this distant date (and memory is such a trickster. Perhaps you’ve noticed…) was his assertion of the ultimate oneness of life and an ultimate harmony of religions. Both of these assertions brought together in a call to direct, intimate and ecstatic personal encounter.

I continue to believe these things are true, although my deeper analysis of the whys of it all has shifted to a more liberal Buddhist understanding.

Nonetheless, I must confess my continuing gratitude for that Indian saint and his vision that touched my own life so significantly.

August 15, 2019
Without Keizan, We Probably Would Have No Idea There Was a Dogen
Next Post