Show Me the Ink: A Reflection on Zen’s Inka Shomei 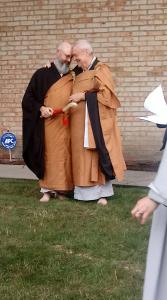 I am just back from Toledo where I had the honor of presiding at an Inka Shomei ceremony for my senior student, and now colleague, Jay Rinsen Weik.

Then today I noticed on one of my Facebook pages the query, what is Inka Shomei for Zen communities in the West?

I shared a brief reflection. And then decided I needed to expand it a bit. And well, here we are.

The term Inka Shomei is one of several used within Zen communities to signal some profound authorization, usually called Dharma transmission – where in both myth and history a teacher acknowledges a student as having seeing into the fundamental matter and is a true master of this ancient and intimate way.

The term is often translated as the “complete acknowledgement of the matter.” Although one Zen wag told me it actually means “Show me the Ink.” Which sort of is true. It means the public acknowledgement, and it is usually accompanied by a document or documents attesting to the event.

Wikipedia attempts to sort out the varieties of authorization, and with some caveats, I recommend reading it.

In Japanese Rinzai Inka Shomei is reserved for very, very senior practitioners. It comes as a combination of a profoundly personal endorsement between student and teacher and is part of a larger institutional acknowledgement for someone being allowed to lead a training monastery.

The title roshi seems to come with that acknowledgement.

In Japanese Soto “dharma transmission” has become a relatively early acknowledgement of basic competence. And the rough equivalent to Inka within Soto is the Shike rank. While it does not have the personal component as in Rinzai, it is the Soto equivalent for being authorized to lead a training monastery.

Interestingly, both Rinzai and Soto use shike for this most senior position in their institutions.

With that in the background, here in the West some Soto lineages have embraced a restored koan curriculum through Daiun Sogaku Harada. With these, most notably the White Plum, a traditional (familial) Soto transmission is preserved. But then a second acknowledgement may follow, confirming a profound insight not historically expected for Soto’s dharma transmission. In this case usually accompanied by completion of Harada’s curriculum, usually in the West called the Harada-Yasutani curriculum, and as well as a level of maturation in teaching.

My own communities (Boundless Way and Empty Moon) have a similar blending. Although for us the traditional priestly lineage is via Jiyu Kennett. However, the second authorization is from the same koan lineage. Dosho Port does the same with his first transmission from Dainin Katagiri.

This Inka ceremony comes with the title roshi, which otherwise is not part of traditional institutional Soto, instead being an honorific.

All this said what makes a true master?

The great master Huangbo  once addressed his community, “You people are all dreg-slurpers! If you go on like this, when will you ever see today? Don’t you know that in all of China, there are no Zen masters?”

One of the members of the community, a little more courageous than most, asks, “Then what about all those people like you who set up Zen institutions, to which students flock like birds?”

Huangbo responded, “I don’t say there is no Zen, only that there are no masters.”

There is that. Of course it’s a koan. An assertion and an invitation.

My experience and observation is that it is an elusive thing. A connection with a real teacher and possessing a real authorization is important. And if one wants to use the word “Zen” it is unavoidable.

But it isn’t sufficient. I believe here in the West all our authorizations are at best acknowledgements of competence in the arts of meditation and confidence on the part of the teacher that the student can also teach.

True mastery cannot, however, be captured or institutionalized. I say this without missing the point of institutions and their necessary part in transmitting the great matter from generation to generation. Still real mastery is something that unfolds over time, and I suspect is always, always dynamic. Now true. Now, well, not so true. Awakening never takes us away from this life. And so it is a messy thing. Just like us. And for us, for anyone to judge needs to be taken large, over the full range of a life.

So, for me, someone who received a couple of acknowledgements. First, ordination as a priest in the Soto way and given what today I’d call a near pro-forma authorization as a full priest and teacher. It was a great gift and a terrible burden. And that authorization, that dharma transmission came more as a koan. Just like with Huangbo’s remarks, an assertion and an invitation. One that I’ve now had to engage for, well, as of this year, forty-nine years. With no particular end in sight.

And then there was the second one, itself, actually with two steps. Here I was initiated into the scrubbed down adaptation of Hakuin’s curriculum in the Takujo sub-lineage, and which I followed with the guidance of my teacher for twenty years.

All along the way I sat retreats, coming at this point to an accumulation of several years of day long practice. But the proof of that pudding has been manifestation in everyday life.

These things taken together have become me.

And, on the 18th of August, for the fourth time in my teaching life, I publicly announcement my confidence in another human being as having done what needs doing. I publicly acknowledged Rinsen as a Roshi in the joined lineage I possess.

I pray he continues and deepens and not makes any fatal mistakes, but helps to serve and to teach and to help to heal this lovely, broken world.

Inka Shomei is a prayer.

August 23, 2019 Want a Spiritual Practice? Memorize These Four Quotes
Recent Comments
0 | Leave a Comment
"What a beautiful piece, James. Sorry to hear about your/our loss. I'm back at Patheos ..."
Satya Robyn The Peace of the Rhinoceros: A ..."
"I like the heart, hand and mind schema. Back in the late 1970s, I went ..."
Daniel Liechty A Path for Spiritual Adults: Francis ..."
"You POS!"
Silk A Mind Bubble Regarding Edgar Rice ..."
"Thanks for this.Jack sure touched many of us and I'm sure he will continue to ..."
Oliver Oehm | James Ford
Browse Our Archives
Related posts from Monkey Mind

The Suffering of Covid-19
One night while I was teaching my Dhammapada class for the Rime...
view all Buddhist blogs
What Are Your Thoughts?leave a comment
Copyright 2008-2021, Patheos. All rights reserved.
Close Ad