Better than Fiction: Or, When a Surrealist Poet was Accused of Stealing the Mona Lisa

Better than Fiction: Or, When a Surrealist Poet was Accused of Stealing the Mona Lisa September 7, 2019 James Ford

It was on this day, the 7th of September, in 1911 that Guillaume Apollinaire was arrested under suspicion of stealing the Mona Lisa.

A classic example of the dangers of being an ironist in literalist times.

Apollinaire was a renowned critic, poet, pornographer and the man who coined the term “surrealism” as well as “cubism.” He would come to be considered one of the signal Western literary figures of the early twentieth century.

One could see why he would fall under suspicion. He had, after all, once called for the Louvre to be burned to the ground. And, well, irony doesn’t play well with law enforcement, literalist times, or not.

Okay, and, it probably didn’t help that it turned out he had given shelter to Vincenzo Peruggia, the man who in fact did steal the painting. And who when he departed from Apollinaire’s apartment left behind some Egyptian statuettes that were also part of the theft.

Knowing things were looking bad, the poet suggested maybe the person they were actually looking for was Pablo Picasso. Apparently there is little honor among the poets. And maybe, who knows, as Apollinaire was a Roman, and his friend Picasso had in the past suggested the poet was the illegitimate son of the current pope, possibly Apollinaire hadn’t thought that tittle jest was as funny as the artist did. Perhaps Apollinaire recalled that as he was looking for someone to give up to the authorities.

And so Picasso was also dragged in for questioning.

And, after a week, so was Apollinaire.

For me here, a small moment to recall the rogue who was also one of our literary greats…

The painting of Apollinaire is by Jean Metzinger.

September 7, 2019 They Say If You Understand the Sound of the Single Hand, You Become Buddha. How Do You Become Buddha?
Recent Comments
0 | Leave a Comment
"long live Theo-poetics! and universalism! and so on and so forth!"
Roger Butts That New Universalism: A Smallest Meditation ..."
"Thank you, James. You explained prayer to me as a way even I could accept. ..."
Ohyetwetrust A Meditation on What My Grandmother ..."
"This reminds me of the story about a priest holding a candle doing a one ..."
Catherine A Meditation on What My Grandmother ..."
"Fun talk. Here's my translation of the case:Raised: Guishan asked Yangshan, “Suddenly there is a ..."
Gregory Wonderwheel Book of Equanimity Case 37
Browse Our Archives
get the latest from
Monkey Mind
Sign up for our newsletter
POPULAR AT PATHEOS Buddhist
1

Buddhist
Hesse Begins His Journey to the East
Monkey Mind 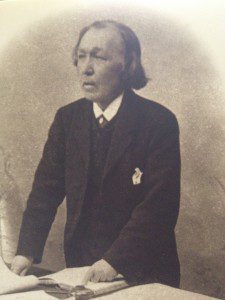