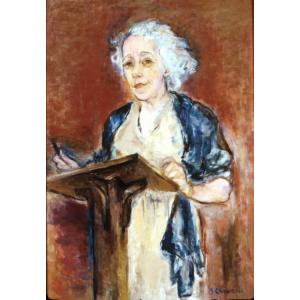 And, then, there’s the Zen thing. For me noting her birthday triggers a cascade of thoughts about the meeting of Western psychology and Zen Buddhism.

A lot of this turns on D. T. Suzuki, the person who along with his popularizer, Alan Watts, first really brought the West’s attention to Zen. Over the years there has been a lot of criticism of Suzuki, his unacknowledged sectarian biases as well as his focus on an a-historical encounter with enlightenment, awakening, and in more recent times noting his alignment with Japanese nationalism during the Second world war. The critique of that focus on awakening divorced from most of the rest of Zen Buddhism’s teachings and practices continue with Alan Watts. On the other hand it was precisely his focus on enlightenment that made Zen so tantalizing for my generation and which opened the doors to Zen becoming a part of Western culture. So, a mixed bag.

As it relates to Horney, when she lived in Manhattan she met Suzuki and formed a friendship. While I can’t find any evidence she practiced Zen in the sense we might understand that term today, there is little doubt her interest in Zen was central to her developing ideas of a “real self.” As a small coda shortly before her untimely death from cancer she traveled with D. T. Suzuki to Japan and toured many Zen monasteries. Its hard not to indulge the great “what if,” what if she’d lived a few decades after this experience, and even, maybe, taken up the disciplines of Zen?

September 15, 2019
When I Think of Saints I think of James Chisholm
Next Post