Dreaming of the Buddha’s Ashes: Last Day in Bangkok 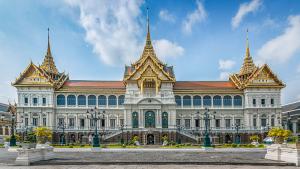 With a single day left I decided, against much good advice to go to visit the Grand Palace. The other day as I was driving with my Bangkok friends we drove by the imposing campus that has served as the official home of the kings of Siam since 1782. They said as wonderful as the campus is, the tourist crush is unparalleled.

But. Its also the location of the Emerald Buddha.

So… I joined a small gang from our Bhutan trip and off we went. 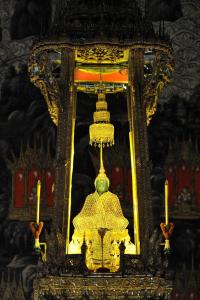 Seriously if I didn’t go I would have regretted it for a very long time.

It was the seat of government until the abolition of absolute monarchy in 1932. The complex is a very large rough rectangle nearly two and a half million square feet. On the grounds are a glorious hodgepodge of halls, pavilions, and other buildings, and including gardens and courtyards. Oh, and, of course, the Temple of the Emerald Buddha. More on that anon. 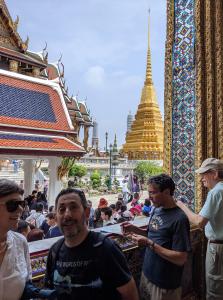 While it is largely open to that crush of the public, it also maintains royal offices. The presence of ceremonious but also armed sentries is a constant reminder this is not merely a museum.

I’ve never seen anything quite like it. And if it was built to impress, it succeeds.

And the grounds also contain three Buddhist sites. The Temple of the Emerald Buddha, more properly the Wat Phra Kaew, a library, and a stupa, the Phra Sri Rattana Chedi, holding what are said to be some ashes or maybe the sternum from Gautama Siddhartha, the Buddha of history.

It is that stupa which most caught me. I didn’t do my research properly, and wasn’t aware of the alleged ashes or breastbone. These things are somewhat similar to pieces of the true cross in Christendom. The stupa itself is faced with mirrored tiles, I believe made of gold. And it does catch the eye. But somehow it kept drawing me. I didn’t climb the steps, but I kept looking at it. It was always near the corner of my eye. And, in retrospect I love that our little gang accidentally circumambulated it. 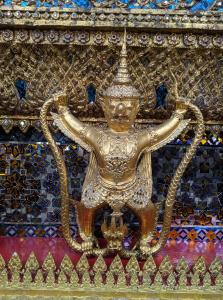 But it’s the Emerald Buddha is what draws people. According to Wikipedia, the Emerald Buddha “is a potent religio-political symbol and the palladium (protective image) of Thailand.” Wikipedia continues “According to legend, this Buddha image originated in India where the sage Nagasena prophesied that the Emerald Buddha would bring “prosperity and pre-eminence to each country in which it resides”. The Emerald Buddha deified in the Wat Phra Kaew is therefore deeply revered and venerated in Thailand as the protector of the country. Historical records date its finding to the 15th century in Chiang Rai where, after it was relocated a number of times, it was finally brought to Thailand in the 18th century. It was enshrined in Bangkok at the Wat Phra Kaew Temple in 1782 during the reign of Phutthayotfa Chulalok, King Rama I (1782–1809).” 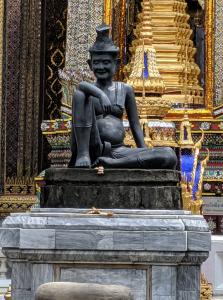 It is carved from a single piece of jade and stands about twenty-six inches. It is partially covered with a cloak that the king personally changes with the seasons three times a year.

The crush of people was unbelievable. And not pleasant. Especially considering the heat.

I would add while the temple is officially functioning it really was hard for me to get the sense of a sacred space. The mix of the political and the almost carnival like motion of the visitors kept me from being able to appreciate it as I have other Buddha images at other temples on this visit.

The divine and kingship. An ancient thing, no doubt. 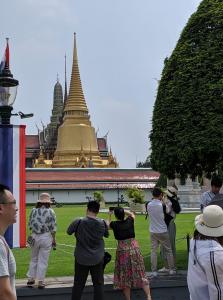 (The first two images are from Wikipedia. No pictures are allowed within the temple, so the only way to show the Emerald Buddha. It is clothed in winter season attire.)

October 2, 2019 The Zen Priest Visits Bhutan, Land of the Thunder Dragon, Encounters some Vajrayana Nuns, And Contemplates How Magical the Real Is
Recent Comments
0 | Leave a Comment
Browse Our Archives
Follow Us!