The Zen Priest’s Briefest Meditation for the New Year 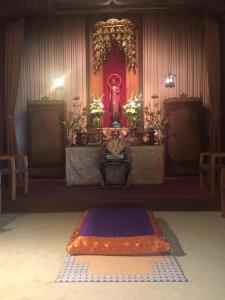 Yesterday felt a perfect way to conclude the old year.

A small band of us from the Empty Moon Zen sangha and the Zen meditation group of the Long Beach Buddhist Church gathered at the church at four in the afternoon for two hours of Zen meditation.

We then moved over to the Hondo, the sanctuary, where we were joined by members of the church for a traditional Japanese Zen service reciting the Heart Sutra and the Daishin Dharani while “revolving the sutras,” making incense offerings, and then ringing the church’s great bell one hundred, and eight times. All of it dedicated to hope and possibility for the world in this coming year.

We then went to the parish hall where we shared a simple eclectic dinner with soba noodles, tamales, and black eyed peas, salad, pie, cookies, and baklava. (I was shocking later to record my WW points and figure out why those Del Real cheese tamales tasted so good.) It was a small pot luck feast. And everyone got enough. That felt really, really important to me.

The group was small, fewer than twenty of us. But we included people of Asian, European, and African descent. And, I really felt we stood in for the whole of this hurt world.

And, it reminded me of how there are gatherings, small and larger, around the world of people dedicating and rededicating lives to hope and possibility.

May the New Year become a blessing for the world…

January 2, 2020 Ernest & Dorothy Hunt: Early Links in the Golden Chain of Buddhism Coming West
Recent Comments
0 | Leave a Comment
Browse Our Archives
get the latest from
Monkey Mind
Sign up for our newsletter
POPULAR AT PATHEOS Buddhist
1