A Brief Pause to Recall Nestorius, Late Patriarch of Constantinople, the Church of the East, and the Luminous Religion

A Brief Pause to Recall Nestorius, Late Patriarch of Constantinople, the Church of the East, and the Luminous Religion August 3, 2020 James Ford

According to the good folk at Wikipedia, it was on this day, the 3rd of August, in 435 that Nestorius, who’d been deposed as patriarch of Constantinople was exiled by the emperor Theodosius II to a monastery in Egypt. I’ve written of him before, although not recently.

This reflection is based on a couple of those earlier ruminations. But, with addition reflections out of this moment.

As a former Patriarch of Constantinople, whatever else one may think about him, Nestorius was a terribly important figure. Within the mainstream of the Christian world, Protestant, Catholic, and Orthodox, Nestorius is considered a heresiarch, advocating a hard division within Jesus’s heart between the human person and the divine. As such he is the putative founder of “Nestorianism,” which is part of the Oriental Orthodox tradition, in the West the lesser known fifth stream of the Christian tradition.

And one of the more ancient…

There are those who contend the patriarch did not in fact hold the views with which he is today associated, and this is possibly true. But those allegations trumped up by Eusebius of Dorylaeum, would stick. Eusebius was at the time a layman, but who out of these disputations would be propelled to the episcopacy, and prominence within the Christian traditions. His attacks were richly rewarded.  A fact not to be ignored.

The fight was then taken up by the rather more important, if with equally clouded motivations, Cyril of Alexandria. Whatever else might be true, out of this Nestorius was condemned by the First Council of Ephesus, and deposed from his patriarchy. And with that condemned to exile. However, even from exile the former patriarch never ceased objecting to the allegations against his orthodoxy. He died sometime after 450 in that exile which began on this day in the fifth century, Great Oasis of Hibis, in Upper Egypt.

What is more interesting to me is that he is the putative founder of the Church of the East (today divided into several jurisdictions). And, for me, most importantly, while I have no particular dog in the theological debates around Jesus’ Christology, it is actually the Church of the East that sent missionaries to China, which is the source of my own dream Christian church, sometimes called the Luminous Religion.

To quote myself: “My friend the independent scholar Adrian Worsfold summarizes the Luminous Religion’s followers as ‘vegetarians, (who) promoted non-violence, charity, sexual equality, care for nature, and were (nearly uniquely in their world strongly) anti-slavery.’ And, while it continues the Trinitarian formula for baptism, with the change of calling the spirit, ‘pure wind,’ the Luminous Religion’s teachings otherwise map nicely nineteenth century Unitarianism, emphasizing ‘salvation by character,’ rather than through a vicarious atonement.”

Of course the big question. My question. What if something actually emerged out of Christianity in a meeting with Buddhism and Daoism, and then streaming together as some new and to my mind and heart delicious version of the ancient Watercourse Way? What would that be? What could that be?

For one possibility, my dream faith…

So, for me, blessings on the saint Nestorius. Blessings on that dream church, which never may exist outside my heart. But, oh my, thrives there…

With that, here’s a little on the so-called heresy attributed to Nestorius, along with a personal defense of the patriarch.

And. Here’s that something a bit more interesting to me.

August 2, 2020
The Craziest Thing: The Zen Priest's Song of Awakening
Next Post

August 9, 2020 DREAMS OF WALDEN POND: The Way of Liberal Religion
Recent Comments
0 | Leave a Comment
"There is a novel based on the philosophy of the Ten Ox Herding Pictures called, ..."
Jay A PILGRIM’S PROGRESS:  Zen, Maps of ..."
"That's a nice cartoon. It always fun to go back in time and see how ..."
David Brevik Fiddlesticks: Recalling the First Colored Sound ..."
"This is a wonderful and incredibly focused article. I am grateful to have read it ..."
Koshin Moonfist Zen Funerals, Rinzai Style: Reflections on ..."
"Mouse eats cat food, cat bowl is broken, then what? - Seung Sahn"
Robert Flannery AN INTRODUCTION TO THE ZEN KOAN
Browse Our Archives
get the latest from
Monkey Mind
Sign up for our newsletter
Related posts from Monkey Mind 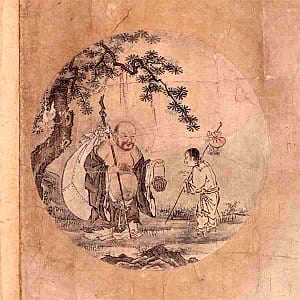