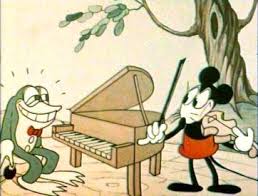 It was on this day, the 16th of August in 1930 that Ub Iwerks released the first color and sound cartoon.

On the one hand a blink of the eye. And on the other, well, its looking hard at a hundred and that’s quite a while ago…

Fiddlesticks featured Flip the Frog and would be the first in a series made by Celebrity Pictures and distributed in theaters by Metro-Goldwyn-Mayer.

Iwerks was the principal animator for Walt Disney and co-created Mickey Mouse. He left Disney studies for several reasons, not least of which was pay. An interesting feature of this particular cartoon is that the fiddle player looks suspiciously like Mortimer Mouse, the earliest incarnation of what would become Mickey.

All that said, without further ado…

August 14, 2020
AN INTRODUCTION TO THE ZEN KOAN
Next Post

August 23, 2020 Sweet Dreams
Recent Comments
0 | Leave a Comment
Browse Our Archives
get the latest from
Monkey Mind
Sign up for our newsletter
POPULAR AT PATHEOS Buddhist
1

When considering whether all religions are...
Monkey Mind
4