Recalling the Birth of the Buddha: Celebrating Hanamatsuri 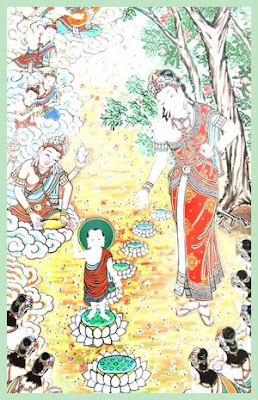 In the Japanese calendar today, the 8th of April is Hanamatsuri.

The Buddha’s birthday is celebrated at other times in other Buddhist countries. Most of Asia likes May. With that, a wealth of possibilities to choose from.

Of course that’s because we don’t have a clue about when Gautama Siddhartha was born. We can only reasonably assume he was a real human being, and beyond that a few details marking his life.

What we know of these things about his life are what we can glean from the suttas or sutras, texts written in Pali or Sanskrit some three, maybe four, possibly five hundred years after he died, and incidentally in languages he himself didn’t speak. So, everything about the Buddha, absolutely all of it must be taken with a grain of salt. Or, an ounce. Or, a pound.

Now, unlike religions that depend upon their founder being something special, unique in history, real actual lived historical history, for those of us attracted to Buddhism, the “truth” of what we have received isn’t judged by whether or not the putative teacher of them is a real person at all. But, rather the only that really matters are whether the teachings are true. And by true we mean do they realistically represent the problems we encounter in life? And do the various fixes to the problems it identifies work, do they bring us to what is promised?

What we are offered is a path. And, yes, in fact several paths, although they all share a family resemblance. But for all of them the path is clearly marked out, and the invitation is for us to find the particular one most resonant, and then to put our own feet on it, and to make our own way. Each of us.

All this said, stories matter. They reflect how human beings think. And so they ground the teachings, give us an opportunity to see them as stories about us. And we very much have a story of the life of the Buddha. Okay, a couple. Or, perhaps more accurately several variations on a theme.

According to one of these stories the queen Maya dreamed how four angels came to her and carried her away to the highest mountains, where a white elephant holding a lotus in its trunk, circled around her three times, and then walked into her right side.

In one version her husband the king Suddhodana consulted sixty-four sages to interpret what had happened, in another it was the ascetic Asita cast an astrological chart. Whether the sixty-four or the one it was prophesied that the queen would give birth to a remarkable child, one who would given circumstances either be the greatest emperor history had ever seen, or the savior of the world.

Not long after the baby was born.

And with that the real story begins.

So, me, I find it worth a brief pause here to take a breath and to recall one world teacher who called us to attention to what is and to live a middle way.

Would that we all followed those precepts.

Okay, we have hints. But. Also. We have an invitation. Another one of those holy birthdays where we are all of us invited into our own new birth, our own new possibilities.

Here’s a lovely description of the celebration from dharma friends at Stone Creek Zen Center.

And, here’s another by way of a Jodoshu temple.

April 9, 2021 Smoke, Spice, and Soul: A Recipe for Collard Green & Andouille Soup, With Cornmeal Dumplings
Recent Comments
0 | Leave a Comment
"Thank you."
Khru The Flowing Bridge: Exploring a Zen ..."
"James, thank you for this fresh breeze of truth. On Holy Saturday, all pretense is ..."
Robert Jonas The Zen of Holy Saturday: A ..."
"Thanks for this. Putting Amato and O'Brien in my queue. And so glad you included ..."
Zen Buddhism The Short Course in Zen: Five ..."
"love this James"
Roger Butts The Zen of Holy Saturday: A ..."
Browse Our Archives
get the latest from
Monkey Mind
Sign up for our newsletter
POPULAR AT PATHEOS Buddhist
1

Buddhist
Creating Community: Are you aging? Are you a...
Monkey Mind