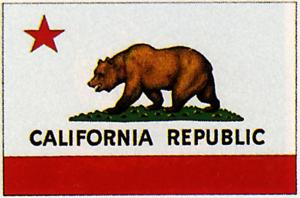 It was today, the 9th of September, in 1850, that California was admitted to the union.

The name comes from a Sixteenth century Spanish romance, The Adventures of Esplandián by Garci Rodríguez de Montalvo. In the novel Queen Calafia ruled a wonderful land  of black Amazon women.

Of course there were already people there when the Europeans showed up. They’d arrived a very long time ago, at least 13,000 years. Some 70 ethnic groups existed at the time of the European encounter, among the larger were the Chumash, Pomo and Salinan.

The first Europeans we know of to visit were a Spanish expedition led by the Portuguese captain Juan Rodriguez Cabrillo in 1542. The English privateer Francis Drake dropped anchor near modern San Francisco in 1579. Filipino sailors explored Morro Bay in 1587. Russians wandered south establishing a post at Fort Ross in 1812.

And so on. But it was the friar Junipero Serra’s 21 missions strung along Alto California, basically our modern state, that provided an anchor for Spanish rule. Like pretty much all European colonization in the Americas it was a brutal enterprise.

Mexico seceded from Spain in 1821. And for the next quarter of a century California was pretty much the back of the back of Mexico, led by Californios, an oligarchy of interconnected families, largely of Spanish descent. They would maintain an uneasy connection to Mexico as a whole, with a number of insurrections over the years.

Americans began arriving around the same time as Mexico threw off their Spanish yoke. First trappers and the odd settler. But they kept coming. The American population continued to expand over the next decades. Insurrections continued. These included the Bear Flag Revolt. While short-lived it has had a half-life as a story for the white settlers, and continues imaginatively as the origin of the state’s flag.

More important was the Mexican–American War, which went disastrously for Mexico. As part of the settlement of their surrender in 1848, Mexico ceded a vast amount of territory to the United States. This included California. The following year California applied to be admitted as a state. And the year after that, as I said at the top, on this day in 1850 California was admitted not only as a state but, critically as a free state. The 31st state within the Union.

In the moment it was all about gold and slavery and a good sized dash of manifest destiny. The Chinese who immigrated there called California “Gold Mountain.” (Later the term would apply variously to the whole West coast and more narrowly simply to San Francisco…) Everyone saw it as the land of possibilities.

It goes with our name California and that black muslim amazon queen, Calafia.

California the dream land of many people…

Today California is one of the great liberal bastions within the American Republic. As an economic force it is the largest among the American states and fifth within the world, ahead of France and the United Kingdom. It has had strong influences in areas as diverse as school textbook selection and automotive emission regulations. Within our American Federalist system it is a major trend setter, something way beyond its enormous cultural contributions.

As a high school drop out it was California’s community college system that gave me a way in to formal academic study, it’s California State University system that traditionally opened doors to the working classes (and in my case rather lower) and specifically Sonoma State University that provided me in my thirties a college education, and then the wondrous Pacific School of Religion and the Graduate Theological Union in Berkeley that polished my schooling.

I recall when Jan & I were in a local grocery and wanted to purchase a container of pico de gallo. The problem was it was the last container and had been mis-labeled and sufficiently overpriced that we wanted it addressed. Jan spoke to the clerk in Spanish while the clerk responded in English, keeping me in the loop, I thought rather kindly.

It felt a very California moment.

A few years ago, before taking on responsibilities consulting with the First Unitarian Church of Los Angeles, I attend two church services. What can I say? The first at our Long Beach Unitarian Universalist congregation. The service began with a shofar and the recurring theme of the service was new beginnings. Then driving directly but not speeding, I attended the Long Beach Buddhist Church’s service, a special dedication to the coming autumn. It was conducted in Japanese and English, with the minister making sure those who were monolingual one way or another were all included.

Oh, and did I mention we have the best food in the world. And, maybe beyond. California is the cradle of my heart. Yes, for ill as well as good. So many shadows in this land of mountains and sea…

Still, after years wandering around this country, I am now in my dotage back home to the land of fire and flood and earthquake.

So good to be home.

September 8, 2021
Mr Roddenberry's Vision Goes Where No Television Show Had Gone Before
Next Post

September 9, 2021 Noticing My Fifteen Years as a Blogger
Recent Comments
0 | Leave a Comment
"Fascinating! I too was enthralled with the voyage of the Kon Tiki, "the audacity of ..."
John Sadowsky Thinking of Thor Heyerdahl & Kon ..."
"There is nothing in the post about a problem or seeking approval."
Catherine A Feast for Our Lady of ..."
"Uma not Ulma"
Ralph Ole Martin Interfaith Dialogue: Robert Thurman and Matthew ..."
"what a lovely tribute!"
Roger Butts Recalling A. Durwood Foster
Browse Our Archives
get the latest updates from
Monkey Mind
and the Patheos
Buddhist
Channel
POPULAR AT PATHEOS Buddhist
1