A Song for the Winter Solstice 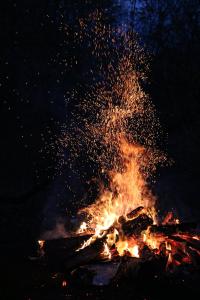 Do not go gentle into that good night,
Old age should burn and rave and close of day;
Rage, rage against the dying of the light.
Though wise men at their end know dark is right,

I understand that when on his deathbed, O. Henry said “Turn up the light! I don’t want to go home in the dark.” And of course there’s Dylan Thomas’ famous rant. There’s something about the dark and human beings. It probably goes all the way back. We lose control, and the monsters begin to circle. And death itself stalks the shadows.

I find it fascinating that it appears we human beings co-evolved with fire. Most importantly that had to do with food and pre-digesting and what that means for energy and the creation of our monster brains. Speaking of monsters. But, also it protected us from those other monsters out there in the night. It held off death.

So, its completely understandable how important this season is. And this day.

This season, right now, this day: the Winter Solstice.

As soon as there were religions, I have little doubt, certainly as soon as we discerned the cycles of winter and summer, we marked out this day.

And small wonder in our culture we even park the celebration of the birth of God on this day. Or, the day a not very good calendar marked out for this day.

Of course we don’t just curse the night. We turn on the light. We burn bonfires. We light candles. We sing songs. We help to turn things toward that light.

This may be the longest night.

But, tomorrow, the dawn comes…

December 20, 2021
Noticing Mrs Luther & the Dawn of the Ministerial Spouse
Next Post

December 22, 2021 Eighteen Zen Koans from the Western Tradition
Recent Comments
0 | Leave a Comment
"Think globally.Act locally.There is a lovely book available called Jesus and Buddha. It shows passages ..."
james warren The Art of Peace in a ..."
"We should not idealize or condemn Muir or anyone else. Muir was a man of ..."
Silverwolf13 A Feast for John Muir, Nature ..."
"The only great work of art ever made by a committee...There is a wonderful appreciation ..."
Nicholas Patterson King James’ Bible is Born
"Thanks for this, James."
mfidelman The Buddhist Temple of Toledo & ..."
Browse Our Archives
Related posts from Monkey Mind