Noticing Mrs Luther & the Dawn of the Ministerial Spouse 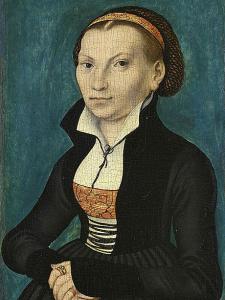 I see that Katharina Von Bora, also known as Katharina Luther died on this day, the 20th of December in 1552.

She can be thought of as the first clerical wife of the “modern” period. Or, more properly I guess, the most prominent of a new class of person, the ministerial spouse.

While a date is commonly accepted for her birth, 29 January 1499, details of her family are vague. Possibly born to the Saxon minor nobility, possibly not. And to be honest, the date isn’t at all clear, either.

What we do know is that she was sent to a convent to be educated at a very early age. This seems to have slipped into a formal religious life. As a nun she became interested in the rising reform movement and reached out to Martin Luther asking for assistance in leaving the cloister.

On the 4th of April, 1523 she and several other nuns escaped hidden in a wagon among barrels of herring. A biography of Luther cited in Wikipedia has a student in town writing “A wagon load of vestal virgins has just come to town, all more eager for marriage than for life. God grant them husbands lest worse befall.” Whatever.

Within two years Luther had provided for all the former nuns through marriage or employment. Except Katharina. She had more than a fair share of suitors. But she declared her interest in two men, only. One of the two was Luther. It’s unclear to me what the nature of the courtship might have been. But clearly Luther was all for it. He is said to have declared this possible “marriage would please his father, rile the pope, cause the angels to laugh, and the devils to weep.”

She immediately took charge of the household. Basically the whole of the practical part of the couples life was managed by Katharina. She also established a hospital, and worked with the nurses.

They had six children together, plus one miscarriage. They also took in four orphans.

There is no doubt this was a patriarchal style marriage. Although it appears that as long as there was a nominal deference she really was in charge of their domestic affairs. And under her management they prospered. There are indications she had occasional influence in matters theological and ecclesiastical. But details are weak.

Luther predeceased his wife. While he left everything to her, Saxon law prevented her from assuming all their assets. With the outbreak of the Schmalkaldic War, she had to flee with her children twice. And with the end of the war the estate was laid to ruin. There was some assistance from the Elector of Saxony, but she lived mainly in poverty for the rest of her life.

In September 1552 she was thrown from a cart. Karatrina lingered for three months before dying. Her last words are said to have been “I will stick to Christ as a burr to cloth.”

Of their children, again, according to Wikipedia, “Margareta Luther, born in Wittenberg on 27 December 1534, married into a noble, wealthy Prussian family, to Georg von Kunheim (Wehlau, 1 July 1523 – Mühlhausen, 18 October 1611, the son of Georg von Kunheim (1480–1543) and wife Margarethe, Truchsessin von Wetzhausen (1490–1527)) but died in Mühlhausen in 1570 at the age of thirty-six. Her descendants have continued to modern times, including German President Paul von Hindenburg (1847–1934) and the Counts zu Eulenburg and Princes zu Eulenburg and Hertefeld.”

This date is marked on the saints calendar among Lutheran churches.

Knowing second hand the trials and tribulations of ministerial spousehood, Katarina has both my sympathy and respect.

A hard row to hoe…

December 19, 2021
EPIPHANIES & THEOPHANIES A Meditation on the Way to Christmas
Next Post

December 21, 2021 A Song for the Winter Solstice
Recent Comments
0 | Leave a Comment
"At the risk of shameless self-promotion I preached a sermon on Julian of Norwich on ..."
amylynn1022 Julian of Norwich and Love. A ..."
"Yes. Lots of depth there. The Psalms are so crucially important to me. I don't ..."
Roger Butts A Unitarian Universalist Investigation of the ..."
"Think globally.Act locally.There is a lovely book available called Jesus and Buddha. It shows passages ..."
james warren The Art of Peace in a ..."
"We should not idealize or condemn Muir or anyone else. Muir was a man of ..."
Silverwolf13 A Feast for John Muir, Nature ..."
Browse Our Archives
Related posts from Monkey Mind