Why Not Become Fire: A Meditation for New Year’s Eve 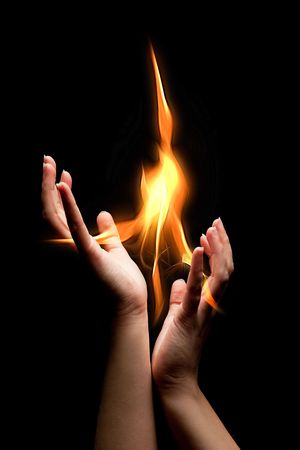 I’m not going to say good riddance. Well. At least not without some qualification. For many of us it’s been hard. No doubt. And there’s not a lot of evidence it’s going to get better any time soon. But. And. In the waning hours of 2021, I find my heart going back to Mary Oliver’s poem The Buddha’s Last Instructions.

“Make of yourself a light”
said the Buddha,
before he died.
I think of this every morning
as the east begins
to tear off its many clouds
of darkness, to send up the first
signal—a white fan
streaked with pink and violet,
even green.
An old man, he lay down
between two sala trees,
and he might have said anything,
knowing it was his final hour.
The light burns upward,
it thickens and settles over the fields.
Around him, the villagers gathered
and stretched forward to listen.
Even before the sun itself
hangs, disattached, in the blue air,
I am touched everywhere
by its ocean of yellow waves.
No doubt he thought of everything
that had happened in his difficult life.
And then I feel the sun itself
as it blazes over the hills,
like a million flowers on fire—
clearly I’m not needed,
yet I feel myself turning
into something of inexplicable value.
Slowly, beneath the branches,
he raised his head.

He looked into the faces of that frightened crowd.

I think of the frightened crowd.

There’s a lot to be frightened about. And. Some words of comfort and joy. We do get people who come along and share a word of hope for us. Every generation produces several.

This year one of them, well, several of them died. Desmond Tutu, beloved Anglican bishop, hero of South Africa, and a guide for all of us, certainly is one. But the one who immediately comes to mind is Hans Kung, who died back in April. A flood of thoughts.

In 1993, a hundred years after the renowned World Parliament of Religions met in Chicago a second parliament gathered. The highlight for many was an address by the Dalai Lama. And certainly a worthy thing.

For me, however, the most important thing to come out of that gathering was a document, “Towards a Global Ethic.” The principal author was the Roman Catholic priest and scholar Hans Kung. Father Kung was something of a controversial figure within his church, I once heard him described as the Catholic Church’s finest Lutheran theologian. He was actually considered one of the ecumenical Christian community’s finest minds.

The document declares there are “four broad, ancient guidelines for human behavior which are found in most of the religions of the world,” which it listed as “irrevocable directives” for those who would find peace on and for our planet.

The document was signed by two hundred religious leaders representing, if not officially, pretty much all the world’s religions, including Christians, Jews, Muslims, Taoists, Jains, Hindus, Sikhs, Buddhists, Zoroastrians, Baha’i, Native Americans and other earth-centered traditions. The Dalai Lama signed it, as did, I’m delighted to note, my old mentor the Buddhist scholar Professor Masao Abe.

I’m deeply moved by this analysis, which I think cuts through the fog of the conservative part of religions, that part which is meant to sustain and transmit a particular culture, defining an inside and an outside, a us and a them – and, which is so often the part of religion used as a club to beat people into conformity. And, instead, really, really succeeds at pointing to the radical heart of pretty much all religions, that part which opens us to the finest of what it means to be human located within and among, fully celebrating, all as a part of some mysterious whole that claims our allegiance. More, claims our very lives.

The first of the directives, a grand intuition of our deep humanity, is that in spite of our natural proclivities to violence, there is always the possibility of a better way. The second tells us we genuinely are responsible for each other, and how our lives need to take that deep truth into account. The third points to our need for broad tolerance, which is found within our commitment to genuine honesty with our selves and with each other. And, finally, that fourth, so buried in so many religions, but implicit at their heart, that women and men need each other, and can only heal from the wounds of life when we see we are all in it together as equals. I would add that the issues of nonbinary reality and sexual minorities are bound up with this last assertion, inevitably, inextricably. Beyond that the major thing missing is a clear statement seeing beyond the wounds of race. Sadly, it is a big thing missing.

Small wonder the Zen Peacemakers founded by the late Roshi Bernie Glassman and other members of the White Plum Asangha have adopted it as a principal document. And, my own Boundless Way Zen first, and now Empty Moon Zen, with some tweaking of the language to address our own sense of the need to fix that one missing point by explicitly including people of every race and condition sharing this small and fragile planet, trying to capture that fullness through the phrase “all people,” also take it as a core document.

Here we these four commitments I feel we find something terribly important being held up. It is a call to a life of authenticity and truth. And it shows us a way of healing for hearts and mending a world torn by strife.

And certainly, certainly this is something expressing much of the heart of the Zen way. At least as I’ve come to understand that way of holiness and care through attention to the totally ordinary. For me this document and its four “irrevocables” take us from ink on paper and into our actual lives.

There is a Japanese saying, gyogaku funi, which means “practice and study are not two. And these four deceptively simple statements, these four commitments are a pretty good way to find how that practice and our investigation of the deep matter are in fact not two.

And. There’s a story from the Desert Fathers and Mothers that feels especially apt in the moment. This moment of great turning. We have the vow. But what do we do with it?

Abba Lot went to Abba Joseph. He told him he had found the rule, a simple thing. Not unlike the four commitments. He prayed, he fasted, he dove into the great silences. The authentic way into the deep, seeking the balance between austerities and licentiousness. The true middle way.

Abba Joseph stretched out his hands to heaven. And he said, “why not become fire?”

And the fingers on his hands became ten flaming lamps.

I think of that story. In the collections of these desert parents there actually aren’t a lot of miracles. Oh, demons come and go. And the odd angel. But, for the most part, we’re left to fend for ourselves.

But, really, really, there is one more step.

It’s kin to this story. It’s kin to the rich young man who went to Jesus and also said he kept the commandments, but felt some lack. And, Jesus replied, sell all you have, give it to the poor, and come, follow me. It’s kin to those frightened faces, knowing the holy one was dying, and they would be alone.

And here we are. Another year dying. Something new birthing. Will it be a monster? Will it be an angel?

Will it be fire?

Here’s a secret. Just for you. It’s in your hands…

December 30, 2021
The Tiniest Recollection of the Mad Monk
Next Post