A Feast for Absalom Jones 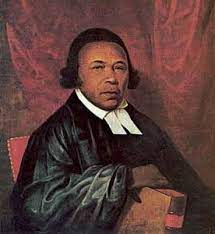 Absalom was born into slavery in Delaware in 1746.

When he was sixteen he was separated from his mother and siblings and accompanied his owner to Philadelphia. After that nightmare things took better turns for him. First he was allowed an education and had a degree of independence. Then he married, the service officiated at by the local Anglican priest. (Reverend Jacob Duché who would become the first chaplain to the Continental Congress). Raising money through a combination of gifts and loans in 1778 he was able to purchase his wife’s freedom. The was critical as it guaranteed their children would be born free. A while later his owner manumitted Absalom, who then took the name Jones as symbolic of his American identity.

Absalom Jones was caught up in the second great awakening and together with Richard Allen became active in the Methodist movement. At that time it was an evangelical expression within Anglicanism. When Thomas Coke and Francis Asbury broke with the Episcopal church and formed the Methodist Episcopal Church, Allen and Absalom Jones were licensed as preachers. In the wake of several events, culminating in being told that blacks could not pray along side their white coreligionists in the new Methodist church, Allen and Jones created the Free African Society.

While Allen and Jones would remain friends on collaborators their vision for social justice, of how to proceed and within what spiritual expression they diverged. Allen remained Methodist and would eventually become the founding bishop of the African Methodist Episcopal Church. While Jones felt called to work within the Episcopal church.

Although he also wanted to be free of white control. Jones was able to gather a community and formed St Thomas’s African Church of Philadelphia on July 17th, 1794. The congregation continues to this day.

While he was the church’s leader he wasn’t ordained a deacon until 1795, and a priest in 1802. Whatever the delays, with that Absalom Jones became the first African American priest ordained within the American Episcopal Church.

He was famous for his preaching. Some white people assumed he exercised some sort of mind control over his hearers, because a black man really just couldn’t be that good as a preacher. He was a fervent supporter of abolition and then the rights of black Americans. During a terrible yellow fever epidemic in 1793 that laid Philadelphia low it was Jones’ and his parishioners and Allan and his that stayed, joining forces with Dr Benjamin Rush when most doctors and nurses fled. They tended to the sick and dying, and buried the dead. Again racism raised its head when a pamphlet was published claiming the black community only stayed in order to profit from the sick. Fortunately the majority saw the facts on the ground and people began to respect the congregation of St Thomas’ Episcopal and their rector as well as the black Methodists.

After faithfully serving his community for more than twenty years Father Absalom Jones died on this day, the 13th of February, in 1818.

Today is celebrated as a feast for a saint in the Episcopal church.

February 12, 2022
The Naturalist Faith of Charles Darwin: A Small Reflection in Honor of International Darwin's Day
Next Post

February 14, 2022 You are not it, but in truth it is you: A Zen Reflection on the Nondual
Recent Comments
0 | Leave a Comment
"everything Jesus has to say about being a true believer of the true way is ..."
Isa Kocher HONEST TO JESUS: The Zen minister ..."
"My translation at http://home.pon.net/wildros...and here https://terebess.hu/english...Terebess has 26 translations at https://terebess.hu/zen/tex..."
Gregory Wonderwheel Faith in Mind, the Xinxinming, a ..."
"Happy birthday in advance, thanks for this thoughtful article and the ones to follow it."
Oliver Oehm Sun Faced Buddha, Moon Faced Buddha: ..."
"Thanks, James. While not specifically Zen, a sangha member alerted me to the book A ..."
Julie A. Nelson Holders of Lineage: A Small Meditation ..."
Browse Our Archives
Related posts from Monkey Mind