You are not it, but in truth it is you: A Zen Reflection on the Nondual 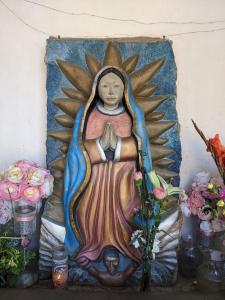 I awoke this morning thinking that line:

You are not it, but in truth it is you.

The poem is commonly attributed to Dongshan Liangjie, a 9th century Chan master and founder of the Caodong (Soto in Japanese) school. Dongshan is also credited with the poetic map of awakening’s faces, the Five Ranks.

The Jewel Mirror is commonly chanted in contemporary Japanese Soto temples and monasteries.

For me that line jumbles with a number of things. What is non duality? What is it not? And what does it mean for us as spiritual practitioners, as people walking the intimate way?

For Reiho Masunaga the line goes: You are not him; he is actually you.

For William F Powell the line goes: You are not him, but he is clearly you.

For Thomas Cleary the line goes: You are not it; It is you.

And then from the recesses of my dream life the official Soto translation: You are not it, but in truth it is you.

On the spiritual way, at least as it is taught within the Zen schools, and captured in the ten Ox Herding Pictures, we come to the loss of all our ideas about ourselves and the world. We tumble into the great empty. Then we find a reconstruction, a rebirth. It manifests first as nature itself, just the world, or rather the worlds, and stars, and all the great mess of the universe. Then we return as a part of this great play of things. But we are old and we are new. We are the same as we’ve always been. Caught up in our wounds and longings. But the healing is also found. Found as nothing other than the being we are. That is you. That is me.

I am not it. My ideas my desires, I own them. They play out as me, and my part of the great net of things.

But, in truth. A line that may not exist in the poem, I’m not sure. But, a moment of turning. A realization. The great lacuna within which all things birth and die. Truth. A lovely word. Even if its not there. It is felt.

Voltaire once said “God is a circle whose center is everywhere and circumference nowhere.”

The secret of the nondual.

When we find this intimate truth we return to the world. We wander freely. We bring a good word. We reach out a hand as we can. We are the infinite itself. But we are just this moment, with all the limitations being a moment brings with it.

But, and this is the great joy, it is enough.

The dharma of thusness is intimately

transmitted by buddhas and ancestors.
Now you have it;
preserve it well.
A silver bowl filled with snow,
a heron hidden in the moon.
Taken as similar, they are not the same；
not distinguished, their places are known.
The meaning does not reside in the words,
but a pivotal moment brings it forth.
Move and you are trapped,
miss and you fall into doubt and vacillation.
Turning away and touching are both wrong,
for it is like a massive fire.
Just to portray it in literary form
is to stain it with defilement.
In darkest night it is perfectly clear；
in the light of dawn it is hidden.
It is a standard for all things；
its use removes all suffering.

Although it is not constructed,
it is not beyond words.
Like facing a precious mirror；
form and reflection behold each other.
You are not it,
but in truth it is you.
Like a newborn child,
it is fully endowed with five aspects.
No going, no coming, no arising, no abiding;
“Baba wawa” – is anything said or not?
In the end it says nothing,
for the words are not yet right.
In the hexagram “double fire,”
when main and subsidiary lines are transposed,
piled up they become three；
the permutations make five.

Like the taste of the five-flavored herb,
like the five-pronged vajra.
Wondrously embraced within the complete,
drumming and singing begin together.
Penetrate the source and travel the pathways,
embrace the territory and treasure the roads.

You would do well to respect this;
do not neglect it.
Natural and wondrous,
it is not a matter of delusion or enlightenment.
Within causes and conditions, time and season,
it is serene and illuminating.
So minute it enters where there is no gap,
so vast it transcends dimension.
A hairsbreadth deviation,
and you are out of tune.
Now there are sudden and gradual,
in which teachings and approaches arise.
With teachings and approaches distinguished,
each has its standard.
Whether teachings and approaches are mastered or not,
reality constantly flows,
Outside still and inside trembling,
like tethered colts or cowering rats.
The ancient sages grieved for them,
and offered them the dharma.
Led by their inverted views,
they take black for white.

When inverted thinking stops,
the affirming mind naturally accords.
If you want to follow in the ancient tracks,
please observe the sages of the past.
One on the verge of realizing the buddha way

contemplated a tree for ten kalpas.
Like a battle-scarred tiger,
like a horse with shanks gone grey.
Because some are vulgar,
jeweled tables and ornate robes.
Because others are wide-eyed,
cats and white oxen.
With his archer’s skill,
Yi hit the mark at a hundred paces.
But when arrows meet head-on,
how could it be a matter of skill?
The wooden man starts to sing,
the stone woman gets up dancing.
It is not reached by feelings or consciousness;
how could it involve deliberation?
Ministers serve their lords,
children obey their parents.Not obeying is not filial,
Failure to serve is no help.
With practice hidden, function secretly,
like a fool, like an idiot.
Just to continue in this way
is called the host within the host.

February 15, 2022 Sleepless for its Terrible Beauty
Recent Comments
0 | Leave a Comment
"I'm sorry to begin with an act of self-advertisement, but everything I want to say ..."
Charles Upton Frithjof Schoun & Traditionalism
"this site will not unsubscribe me so i'm getting back MY way. HAHAHAHAHA! https://uploads.disquscdn.c..."
Robert Willis Water and Light Soaking into the ..."
"i KNOW that ALL religions are for people that were indoctrinated as children and still ..."
Robert Willis Water and Light Soaking into the ..."
"Ive seen more and more Chirstian Buddhists. I wondered why Buddhists have lost their compassion ..."
Brianna LaPoint Zen Meditations on the Mysteries of ..."
Browse Our Archives
Related posts from Monkey Mind