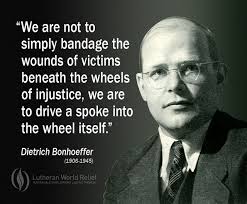 It was on this day, the 9th of April in 1945. The allies were closing in and it was just two weeks before the collapse of the Nazi regime. It was one day after a trial before an SS judge.

At dawn, the Reverend Dietrich Bonhoeffer was stripped naked, marched to the place of execution, and hung.

It is unclear whether he had been tortured before, but historians are increasingly of the opinion that he was. Possibly for as long as six hours.

A leader of the Confessing Church, Bonhoeffer had been convicted of joining in a conspiracy to assassinate Adolf Hitler.

He is remembered as an inspiration for future leaders of faith standing up in opposition to various tyrannies. And today I find myself thinking of him and his choices and the consequences that followed.

It is a very dangerous walk between Scylla and Charybdis, this choosing to resist evil. And, how. Religions. Politics. A dangerous mix.

But. When the world is on fire? What to do?

As I see it, to reach for another image, to touch the importance and difficulty;  pick your poison. But pick we must.

To breathe is to act.

So, recalling the ill that will follow any action, I feel called to listen, to fall into that place of not knowing, to hesitate…

Blessings on Dietrich, and all those who have chosen to act.

Both the Lutheran and Anglican churches commemorate this day in their liturgical calendars. Seems right to me…

April 10, 2022 Announcing the appointment of three Apprentice Zen Teachers
Recent Comments
0 | Leave a Comment
"It is worth noting that the common notion, of Johnny Appleseed as itinerant apple planter ..."
mfidelman Recalling the American Nature Mystic Johnny ..."
"WTC, blown up with nukes made in Israel."
Rusty 9/11 Twenty-0ne Years Later
"Thank you, Greg. An interesting non-trinitarian body. Actually what I was soliciting and continue to ..."
jamesiford Recalling the Unitarian Bishop Gregorio Aglipay
"e"
Wemmu Finding the God Within: Zen, Marcus ..."
Browse Our Archives
Related posts from Monkey Mind