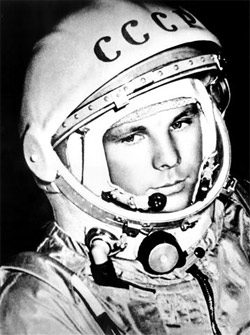 Today, the 12th of April, 1961, sixty-one years ago Yuri Gagarin flew the Vostok 1 in an orbit of the Earth. With this Yuri became the first human being to touch outer space.

As the rocket was poised to launch ground control informed him they were about to lift off, and he replied, “Poyekhali!” Which translates as “Let’s go!” I understand what was then called the Eastern bloc, his excited call to go has become the moment they mark as when the space age began. I like that. And I agree.

The excitement, the dream of humans reaching the stars began to be something closer to a reality in that moment. And I love when dream and reality touch.

Sadly, Gagarin died only seven years later on a routine training flight. He left his wife, Valentina Goryacheva, a doctor and research scientist, and their two daughters, Yelena who became an art historian, and Galina, who became a professor of economics.

As it happens NASA’s first space shuttle, the STS-1 was launched on the same day twenty years later. It was an accident, the original intention was to launch two days earlier. But, I like, a lot, that it happened the way it did.

And that opened another door. This day, the 12th is an international moment where humans can look to the skies and think we might, we just might go into space. That dream to explore, to go, to see is such a deep human thing. And it makes me glad. I hope the current crimes of the Russian empire doesn’t obscure this holiday of human possibility.

Forty years later George Whitesides the CEO of Virgin Galactic, his spouse Loretta Hidalgo Whitesides, and Trish Garner decided this day should be celebrated. And they organized an event to do so. They called it Yuri’s Night. This has been repeated every 12th of April ever since. And it really has caught on. There are more formal celebrations, the Russian Federation celebrates the day as Cosmonautics Day and the United Nations designed the 12th as the International Day of Human Space Flight.

According to the good folk at Wikipedia, “Yuri’s Night events ‘combine space-themed partying with education and outreach.’ Parties and events are held at NASA centers, museums, schools, bars, houses, and other locations.” So, whether you’re a party animal, or just pause to lift one in honor of the occasion, do pause, and look to the night sky.

Some think it is our destiny out there. I’m not quite sure of that. But, I turn my head up and I find my heart leaps.

April 10, 2022
The Luminous Religon: Nestorian Christianity in China
Next Post