A Feast for Stinky Cheese 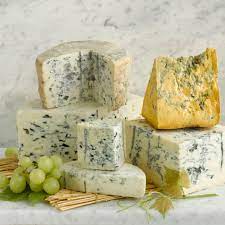 It was on this day, the 4th of June in 1411, that King Charles VI granted a monopoly for the ripening of Roquefort cheese to the people of Roquefort-sur-Soulzon. Today the European Union recognizes this in law dictating only those cheeses aged in the Combalou caves of Roqueort-sur-Soulzon may bear the name Roquefort. As it should be…

Wikipedia tells us how “Legend has it that the cheese was discovered when a youth, eating his lunch of bread and ewes’ milk cheese, saw a beautiful girl in the distance. Abandoning his meal in a nearby cave, he ran to meet her. When he returned a few months later, the mold had transformed his plain cheese into Roquefort.

“In 79 AD, Pliny the Elder praised the cheeses of Lozère and Gévaudan and reported their popularity in ancient Rome; in 1737, Jean Astruc suggested that this was a reference to an ancestor of Roquefort. The theory was widely taken up, and by the 1860s was being promoted by the Société des Caves.” While the factuality of all this history is disputed, certainly by the middle ages Roquefort had become a recognized cheese.

Whatever. The time is at hand.

Me, I think of Roquefort as a gateway cheese to the world of Stinky Cheese. Not the stinkiest, by any measure. (For more on that subject) For me Roquefort is the pivot point in the world of cheeses, and therefore a worthy thing. And a symbol of the good that is cheese.

And so also a call to the curious of heart and tastebud. And those wonders that await…

Let all hail this day as the Feast of Stinky Cheese!

June 5, 2022 No There There: A Zen Dharma Talk
Recent Comments
0 | Leave a Comment
Browse Our Archives
Related posts from Monkey Mind