A True History of Mary Magdalene 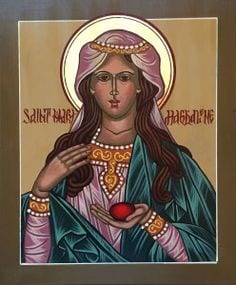 In pretty much all sacramental Christian churches today, the 22nd of July, is marked out as a feast for Mary Magdalene.

Me, I find her pretty much endlessly fascinating. She was arguably the closest of Jesus’ various disciples. According to some sources, admittedly mostly at the fringes of the canonical texts, she is considered his true successor. I’m kind of inclined in that direction, myself.

Mary enters the canonical narrative as profoundly troubled. In Luke she is said to have been possessed by seven demons, which Jesus drove out of her. From there she became his devoted disciple. And from that time a constant companion. In the canonical gospels she is named a dozen times. Significantly Mary is noted as a witness to the crucifixion in three of the gospels. And as testified in all four, a witness to the resurrection.

Beyond the evidences within the gospels, Mary has been made out to be a problematic figure. Often it sure looks like someone wants to put her in her place. By which I mean definitely not up to the standards of an authentic apostle. It’s outside the gosples we get the prostitute connection. While others have made much of the potential analogy between the seven demons and the seven deadly sins, taking a problem and frothing it much further, showing her as a seriously troubled soul.

It’s worth noting how it wasn’t until some four hundred years after her death that we seriously get the “repentant sinner” meme, when Ephrem the Syrian took it up. That said, the major culprit in the campaign of calumny against her is Pope Gregory (the Great) who in 591 appears to first have made her a prostitute. The pope collapsed Mary Magdalene with both the repentant sinner with the the perfume and with Mary of Bethany, Lazarus’s sister. Sadly, but upon consideration, hardly surprisingly, this collapsed or “composite” Mary of the shady past has been carried forward ever since.

It is important to note the Orthodox never went with this narrative. Their own non-canonical traditions never have her being a prostitute and instead focused on her living on after Jesus’ death as companion to his mother. And even in the West both John Chrysostom and Ambrose rejected this view. If I understand this correctly, this prostitute meme has never been part of the Benedictine tradition, either. Actually in its own good time the Roman church has finally and formally rejected this view through a 1969 revision of its calendar of saints.

This all said, the majority of Western Christians have Mary as that penitent prostitute. The reasons for this are numerous. And not all of them pernicious. But, it can’t be missed how at the same time she fits all the traditional definitions of an “apostle,” the primary successors to Jesus’ ministry. A major problem for some people. Her having that shady past has much less currency in our contemporary Western culture. But it continues as a hint, a whisper, of why she should not be considered what she in fact was.

Mary Magdalene was a close, and who knows, there are strong suggestions she maybe was the closest of Jesus’ disciples.

Going in another direction, she has also been describe as Jesus’ wife. I like that idea. Me, I’m quite taken with the gnostic text, the Gospel According to Mary. Although, I admit I don’t understand how the scholar Karen King, whom I deeply admire, can date it to the actual time of Jesus. Most scholars place it in the second century. In truth this admiring picture is slightly more plausible than the prostitute meme, but only slightly.

On the other hand, taking all these various directions together, as James Carroll gives us a more compelling picture:

Christians may worship the Blessed Virgin, but it is Magdalene with whom they identify. What makes her compelling is that she is not merely the whore in contrast to the Madonna who is the mother of Jesus, but that she combines both figures in herself. Pure by virtue of her repentance, she nevertheless remains a woman with a past. Her conversion, instead of removing her erotic allure, heightens it. The misery of self-accusation, known in one way or another to every human being, finds release in a figure whose abject penitence is the condition of recovery. That she is sorry for having led the willful life of a sex object makes her only more compelling as what might be called a repentance object.

That kind of works for me. And so throughout history, and even implied in the admittedly wildly a-historical Gospel According to John, we see such notables as Peter Abelard and others referring to her as the apostolorum apostla, the “apostle to the apostles.” And, according to some, his true successor.

So Jane Schaberg tells us in her study the Resurrection of Mary Magdalene:

(1) Mary is prominent among the followers of Jesus; (2) she exists as a character, as a memory, in a textual world of androcentric language and patriarchal ideology; (3) she speaks boldly; (4) she plays a leadership role vis-à-vis the male disciples; (5) she is a visionary; (6) she is praised for her superior understanding; (7) she is identified as the intimate companion of Jesus; (8) she is opposed by or in open conflict with one or more of the male disciples; (9) she is defended by Jesus.

For me, what we get with Mary Magdalene is something of a Rorschach, we tend to see what we want.

But what I want, and what I absolutely see, is a woman of wisdom. I find in her someone who has been marginalized, but who probably was among the closest of Jesus’ disciples, and maybe even his true successor.

Something wondrous. Something to celebrate.

July 21, 2022
Carlos Duarte Costa, A Church for Jesus, and Christian Communism
Next Post